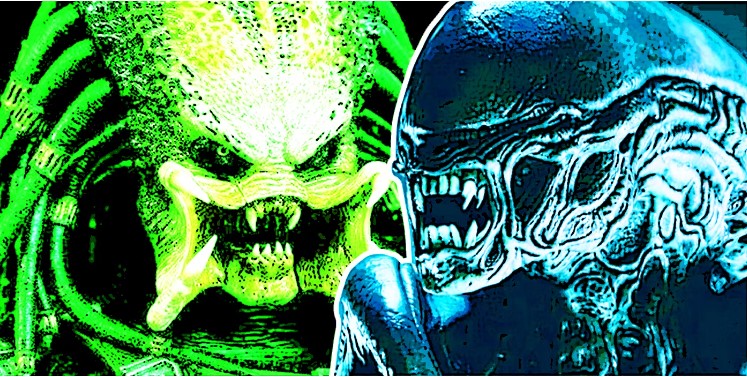 Showdowns are as much of a fixture of movies as they are of wrestling. Movies ranging from Batman v. Superman: Dawn of Justice to Grudge Match to countless classic Universal Monsters movies have been built upon the idea of pitting two formidable figures of the silver screen against one another. The 2004 movie Alien vs. Predator was no exception to this phenomenon when it smashed together 20th Century Fox’s two most iconic alien characters. For many, this duel seemed like a no-brainer, but putting together a showdown between two vicious cosmic forces didn’t happen overnight.

Alien vs. Predator Started as a Comic Book
Though it would become most famous in pop culture as a movie, the concept of Alien vs. Predator started as a comic book presented by Dark Horse Comics at the end of 1989 and the start of 1990. In an interview with Comingsoon.net, Dark Horse Publishing editor Randy Stradley noted that the genesis for an Alien/Predator crossover began to blossom by Dark Horse holding the comics licenses to both properties. Editor Chris Warner conjured up the idea of pitting the two beasts together and, after getting permission from 20th Century Fox, the concept was green-lit. Neither of these blockbuster franchises was ever going to be the same again.

While he couldn’t confirm it, Stradley did feel highly confident that it was the Alien vs. Predator comics that inspired the team behind Predator 2, released in November 1990, to include an Easter Egg on a Predator spaceship: a fully cleaned Xenomorph skull. For some audience members, it was something that passed by in the background without a thought. Those that caught it may have just seen it as a cute nod to another R-rated sci-fi action franchise. But for those in the know that had been reading the highly popular Dark Horse comics, the presence of this prop was enormously important. In the live-action canon of these two movie franchises, Alien and Predator canonically knew each other. What was initially confined to just the pages of comics was now breaking out in a big way.

It Was Only a Matter of Time Before Alien vs. Predator Hit the Big Screen
With this development, it was only a matter of time before there was an Alien vs. Predator movie. Such a project began to show signs of life as early as 1991 thanks to a screenplay penned by Peter Briggs. Titled The Hunt: Alien vs. Predator, this prospective crossover event would’ve been set on a planet called Ryushi. Inhabited by a collection of colonists, it would’ve been the backdrop for a gnarly duel between the Alien and Predator species, with a bunch of humans trying to just survive in the middle of all the cosmic carnage. Briggs had some appropriately expansive ideas for this monster mash that showed all the deeply cinematic possibilities of this core concept.

This script came at a momentous moment for both the Alien and Predator franchises. Alien 3 had failed to light the box office on fire and Predator 2 had similarly struggled to meet lofty financial expectations. These were important franchises to Fox and they needed to get a new jolt of life. It’s easy to imagine that the concept of pitting these two aliens together would be just the ticket to getting these sagas back on track. Unfortunately, Fox didn’t pursue this screenplay. Instead, a new solo Alien title, Alien: Resurrection, was created instead while the Alien vs. Predator name was used for a 1994 Capcom game. The pieces may have been in place for a big cinematic crossover event, but audiences would have to wait a while to see them all put together.

The Alien vs. Predator Movie Concept Lay Dormant for Years
Thus, the concept behind this motion picture would remain dormant for years and years. In the first few years of the 21st century, a fresh screenplay, written by James DeMonaco and Kevin Fox, had been conjured up and was deeply loyal to the original Dark Horse comics. This approach would’ve doubtlessly pleased certain fans of that source material, but it wasn’t what the people in charge of this prospective movie had in mind. Producer John Davis and others involved in the project opted to pass on this script. Nearly a decade after that Briggs script was penned, there was still no real creative momentum on a big-screen take on Alien vs. Predator.

It would take genre movie veteran Paul W.S. Anderson to finally get this movie off the ground. Previously the helmer of Event Horizon and the first Resident Evil movie, Anderson would become the man tasked with directing the first motion picture to star two of the most iconic otherworldly beings ever to grace the silver screen. Talking to IGN on the set of Alien vs. Predator, Anderson revealed that he had the idea for Alien vs. Predator nine years prior to the start of principal photography (which would place the genesis for the project around 1994). He also revealed that his desire to set this showdown on Earth stemmed from his constant desire to see the Xenomorphs come to Earth. Between the infamously misleading Alien 3 teaser and the ending of Alien, Anderson had been yearning to see these creatures wreak havoc on Earthlings for years now. Finally, he would get his chance with Alien vs. Predator.

Alien Franchise Creatives Didn’t Like the Concept
Key creative members of the Alien franchise had expressed displeasure with the concept of an Alien vs. Predator movie, namely James Cameron and Sigourney Weaver, with a 2003 interview with Weaver on the Alien Quadrilogy DVD box set revealing that her characters demise in Alien 3 was partially inspired by a desire not to be involved with a prospective Alien vs. Predator movie. However, Alien vs. Predator still tipped its hat towards the larger films that spawn it, most notably in having actor Lance Henriksen show up as the leader of the Weyland Corporation, which would eventually create the Bishop android that Henriksen played in Aliens.

In retrospect, Alien vs. Predator is a bit different than other big pop culture crossovers that have emerged in the last decade. Projects like The Avengers or Jurassic World: Dominion have normalized smashing together beloved lead characters from separate movies, even if they were released decades apart. Alien vs. Predator, meanwhile, only brings Henriksen back from earlier installments of the franchise. No signs of Weaver and Arnold Schwarzenegger teaming up together, nor does the mythology of earlier movies get to come back into play (Alien vs. Predator takes place centuries earlier than the other Alien movies). This explains why the film functions as a solid standalone trifle decades after its release, but also illuminates why it couldn’t quite satisfy fan expectations, especially considering this first crossover was rated PG-13.