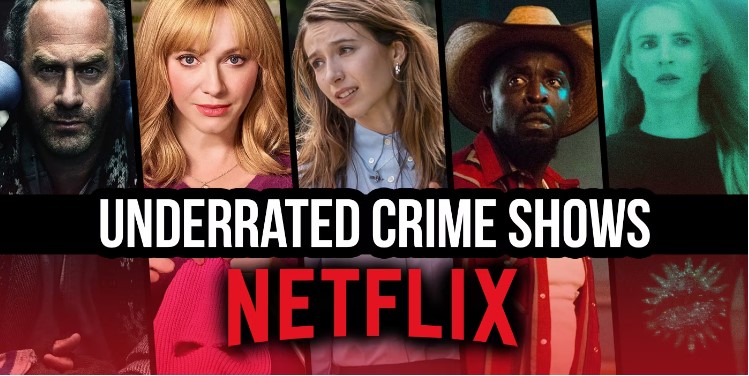 By now the world is familiar with how Walter White came to stand in the middle of the New Mexico desert in nothing but his underwear. Penn Badgley has earned a badge of honor as the psychopathic heartthrob in the Netflix original thriller series You, and everyone wants to be friends with the juvenile delinquents on Outer Banks. As true crime podcasts and documentary series like Making a Murder and Joe Exotic: Murder, Mayhem, and Madness continue to thrive, so have addictive and dangerous crime series.

Netflix is currently a hot spot for criminals and is host to various acclaimed series like Breaking Bad, Better Call Saul, Squid Game, and more. As of now, the streaming service doesn’t show any intention of slowing down its production of petty thieves.But the wrongdoings don’t have to stop with shows like You and Narcos: Mexico, and the streaming service contains several more tales of lawless crooks living in obscurity amongst the more flashy, obvious outlaws. Here are the underrated crime series on Netflix streaming right now.

For more recommendations, check out our list of the best legal dramas and shows to binge-watch on the platform.

Unbelievable (2019)
Set during 2008-2011, Unbelievable is a gut punch of a series about a teenager who was charged with lying about a rape. Marie Adler (Kaitlyn Dever) is the survivor of a violent sexual assault, but the problem is that no one will believe what happened to her. The series follows two Colorado cops — Toni Collette’s Detective Grace Rasmussen and Merritt Wever’s Detective Karen Duvall — as they chase down the trail of a rapist in their separate counties. Based on a Pulitzer Prize-winning article, the series can be difficult to watch at times, and definitely triggering for those who might be sensitive to the topic of sexual assault. But, Collette and Wever’s performances make it all worth it as they doggedly hunt down the monster who is hunting women. A heartbreaking look at the prejudice that the justice system has against the victims of rape, Unbelievable is one that you can’t miss. — Therese Lacson

The Chestnut Man (2021-present)
The Chestnut Man is a grisly Danish crime drama that’s been compared to The Bridge and The Killing in themes and tone. Set in a Copenhagen suburb, The Chestnut Man follows an ambitious new detective and her partner as they explore the mysterious murder of a young woman whose body was discovered missing her hands and laid below a small doll made of chestnuts. In addition to building tension while waiting for the pieces of the puzzle to unfold, The Chestnut Man is full of layered and complex characters similar to the award-winning series Mare of Eastown. – Yael Tygiel

Aquarius (2015-2016)
Take a trip back to the 60s, where the hair was longer, the skirts were shorter, and the Devil had come to Los Angeles in the form of Charles Manson. In the NBC period piece, Aquarius, David Duchovny portrays Sam Hodiak, a detective hot on the trail of Manson as he searches for a teenage runaway. The runaway in question, 16-year-old Emma (Emma Dumont), leaves home after meeting the Manson family at a party, and proceeds to embrace their violent, drug-induced lifestyle while trying to forget her former, picture-perfect life. If you miss Mad Men and want more of the swinging 60s, Aquarius is the perfect follow-up, as it’s sprinkled with pop culture candy while also revealing a darker side to the iconic and revolutionary decade. Actor Gethin Anthony (Game of Thrones) gives an eerily spot-on performance as Manson, and the series is engulfed in dread as it leads up to that inevitable night in August 1969 on Cielo drive.

Designated Survivor (2016-2019)
The political thriller, Designated Survivor, follows the direct aftermath of a deadly attack on the U.S. Capitol during the State of the Union Address that leaves the President and almost everyone else in attendance dead. In case of catastrophic events such as this one, each year a single cabinet member is chosen to be the designated survivor, and therefore does not attend the event. This time around, it’s the Housing and Urban Development secretary, Tom Kirman, played by Kiefer Sutherland. Now, the underqualified Kirman is sworn in as President, and he must quickly learn how to govern a country while also hunting down the terrorists responsible for the attack. With Sutherland in the lead, the series has traces of the Fox thriller 24, and its charming banter between White House aides evokes memories of the classic political series, The West Wing. Actress Maggie Q (Nikita) takes up most of the action, portraying a tough-as-nails CIA agent that plays a dangerous cat and mouse game with the anonymous terrorists. Running for two thrilling seasons on ABC before getting cancelled, its third and final season was thankfully picked up and released by Netflix.

Longmire (2012-2017)
The A&E turned Netflix original neo-western series, Longmire, is a fresh take on the cop procedural that trades in skyscrapers for the Wyoming mountains. Following Sherriff Walt Longmire as he solves various crimes in the expansive Absaroka County, he also contends with inner demons and a tortured past. A weathered cowboy amongst the last of his kind, Longmire is based upon the long-running book series written by Craig Johnson. The supporting characters include the spunky deputy Victoria Moretti(Katee Sackhoff), Longmire’s daughter, Cady Longmire (Cassidy Freeman), and local bartender Henry Standing Bear (Lou Diamond Phillips), as they all come to Longmire’s aid while he hunts down a colorful slew of cowboys and thieves amongst the unforgiving Wyoming wilderness.

Dare Me (2019-2020)
The USA drama, Dare Me, is a dark and dirty examination of the sacred bond between two cheerleaders, Addy (Herizen F. Guardiola) and Beth (Marlo Kelly), and the manipulative power dynamics that lurk beneath their sweet smiles. When former hometown hero, Colette French (Willa Fitzgerald), arrives back in town and becomes the new head cheerleading coach, her take no prisoners approach pushes the girls to their breaking point, and they begin to crack under pressure. A glitzy, neo-noir mystery that foreshadows a murder is waiting in the wings for one of the townspeople, Dare Me is a ticking time bomb of suspense and glitter. During its first season, the series was unable to find its footing amongst audiences, and it was unfortunately cancelled before anyone knew what they were missing. Based upon the 2011 novel written by Megan Abbott, if you’re anxiously awaiting the return of teen thrillers like Euphoria and Riverdale, enter the dreamy world of backstabbing, backflipping teenage girls in Dare Me.

Wynonna Earp (2016-2021)
The wild west gets a modernized, supernatural twist in Wynonna Earp, the Syfy original horror series based upon the comic book series of the same name. Melanie Scrofano stars as the gun-toting Wynonna Earp, great-granddaughter to the legendary gunslinger, Wyatt Earp. When she returns to her hometown of Purgatory after years away, she resurrects several vengeful demons called revenants, and all hell breaks loose. Seeking payback after her great-grandfather killed them over a century ago, Wynonna fights back against the revenants with the help of her sister, Waverly (Dominque Provost), Deputy Marshall Xavier Dolls (Shamier Anderson), and the immortal Doc Holiday (Tim Rozon), former best friend to Wyatt Earp. Never taking itself too seriously, Wynonna Earp has elements of classic B-Horror movies, as outlaws sporting cowboy boots and southern twangs battle vicious monsters spewing fire and guns.