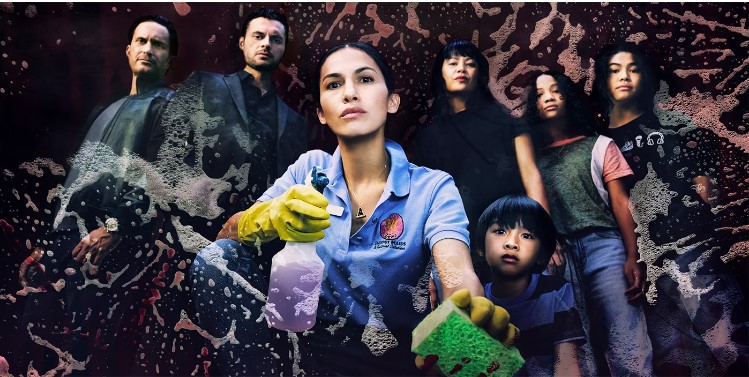 When The Cleaning Lady aired its finale earlier this spring, the story had taken a sharp turn from where it started. Thony De La Rosa (Élodie Yung) started out as a doctor who traveled to the US from Manila in order to get her son Luca treatment for his rare life-threatening illness. However, when her visa expires, she is trapped in Las Vegas until Luca is able to find help and she becomes a cleaner. During her time as a cleaner, she meets a gangster named Arman Morales (Adam Canto), who hires her in order to be a cleaner for the mob and in exchange he offers her his protection and helps her son get treatment.

By the end of the season, she was deep in the business of the mob, helping to get Arman out of prison while also navigating a dangerous relationship with Garrett Miller (Oliver Hudson), an FBI agent intent on taking down the mob. The season looked closely at Thony and her family’s identities as undocumented immigrants, it looked at the fears and realities of what it’s like to live undocumented in America, it was also a season heavy with drama with both the mob and Thony’s own family.

Season 2 picks up not long after the finale, with Thony enlisting the help of Garrett in order to chase down Marco (Ivan Shaw), Thony’s estranged husband, who has kidnapped Luca in order to take him home to the Philippines. While much of the first episode acts as more as an establishing episode that reminds us where Arman, Thony, and the rest of the characters are, that doesn’t mean it is without its shocking moments.

The Cleaning Lady has never really held back from shocking moments and huge shifts in dynamics. We saw Thony nearly get deported in one episode and then saw her holding $2 million in cryptocurrency in another. This season feels like we’re going to be leaning further into storylines with Thony’s close family. With Luca in a better medical condition, it feels like we’re going to be taking a closer look at Fiona (Martha Millan) and her kids Chris (Sean Lew) and Jaz (Faith Bryant). Obviously, we know that Fiona is Thony’s sister-in-law, but this season also lets us meet Fiona and Marco’s parents, which clears up some of the dynamics between the family and perhaps gives us insight into why Thony isn’t so eager to return home.

The show does feel its most electric when it uses Thony’s anonymity to the benefit of Arman’s plans, and we get more of that this season. The show introduces Naveen Andrews as Robert Kamdar this season, a dangerous figure who promises to add drama to the story involving the mob. We’ll also be seeing more of Nadia (Eva De Dominici), Arman’s wife, as De Dominici is promoted to series regular as well.

I would be remiss also not to talk about the chemistry between Thony and Arman, which was electric in the first season. One of Arman’s redeeming qualities was how soft his heart was when it came to Thony, going out of his way to help Luca get the treatment he needs. Those sparks have not subsided, with Nadia and Marco’s return into their lives. While it’s unclear where they stand with each other, it’s clear for many people to see that there is something going on with the two characters, and we’ll be getting more of that this season.

Having seen the first two episodes of the season, The Cleaning Lady is setting up new conflicts for the season while quickly and efficiently wrapping up some of the larger roadblocks of Season 1. It’s clear that we’ll be looking more into the case that Garrett previously worked on, as they introduce Maya Campbell (Chelsea Frei) as Garrett’s CI and someone that he had a romantic relationship with. Similarly, Andrews’ Robert Kamdar presents a new challenge for Arman and Nadia.

It’s still way too early to tell the tone of the season, but given how Episode 2 ends, it feels like the show gets back on track and on a new normal. In many ways, the first two episodes feel like an epilogue to the first season and a prologue to the second. There is still a lot of story to tell.