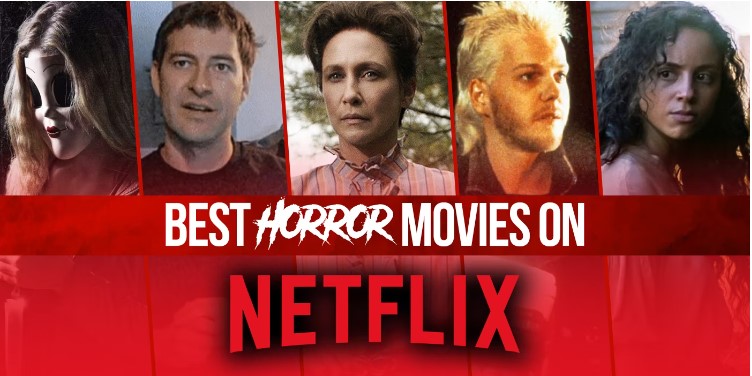 Looking for a scary movie to watch on Netflix? Any time is the right time to watch a horror movie. Waiting for October to indulge in frightening films is the old way to get your tricks and treats, like renting from Blockbuster or not using Treatster to map out which houses give out the best candy. No, in the modern world, you can sit back and enjoy your scares from the comfort of your own couch thanks to screaming streaming content from Netflix.

With that in mind, we’ve put together a list of the Best Horror Movies on Netflix right now, an evolving list that will provide you with classic horror selections and modern cuts to get your fright fix. You can find modern takes on Stephen King stories like Gerald’s Game and In the Tall Grass, horror franchises like The Conjuring and Fear Street, and more. There’s something for everyone here and more to come as Netflix continues to expand its catalog. “Viewer beware — you’re in for a scare!”

Things Heard & Seen (2021)
Based on the novel All Things Cease to Appear by Elizabeth Brundage, Things Heard and Seen is a chilling story about a young couple that moves into a country home with a disturbing past. Amanda Seyfried (Jennifer’s Body) brings the audience on her journey as she explores the darkness in her new house, town, and marriage. Contrasted with Seyfried’s naive yet restless Catherine is her suspicious husband George, played sinisterly by James Norton. Co-directed by Shari Springer Berman and Robert Pulcini, Things Seen and Heard blends old-school psycho-sexual thriller tropes with updated horror technologies to produce a terrifying modern classic. – Yael Tygiel

Resident Evil (2002)
If you enjoyedResident Evil: Welcome to Raccoon City, check out the movie that started the franchise.Resident Evil stars Milla Jovovich as Alice, the badass who is determined to clean up after the Umbrella Corporation’s biotech chemicals have created zombies… and worse. If you are looking for high-intensity action and lots of cool monsters, this is one you can’t miss.

Umma (2022)
As Grey’s Anatomy, The Chair, and Killing Eve has shown us, there’s truly nothing that Sandra Oh can’t do. She proves that yet again in Umma, where she plays Amanda – a Korean immigrant homeschooling her daughter Chrissy (Fivel Stewart) on a rural farm away from technology. Amanda is not only dealing with the stress of her Chrissy wanting to move away for college, but she’s also having flashbacks of her abusive childhood after receiving the ashes of her recently deceased mother – as well as a vicious spirit intent on inhabiting her body. The film offers up some supernatural scares, but the themes of generational trauma and identity are where the true terror lies. – Taylor Gates

It (2017)
Based on one of the most terrifying horror miniseries from 1990, the 2017 remake of It elevated the fear and effects of the fan-favorite horror property. Directed by Andy Muschietti, who has a plethora of experience in the genre, It follows a group of outcasts in small-town Maine who find their strength as they battle against a shape-shifting monster. While the monster is more recognizable as a clown, creepily played to perfection by Bill Skarsgård, the cast of youth are also familiar faces, including Stranger Things’ Finn Wolfhard and Sharp Objects’ Sophia Lillis. – Yael Tygiel

Choose or Die (2022)
When Kayla (Iola Evans) discovers an old ‘80s computer game that comes with a yet-to-be-claimed $100,000 cash prize for anyone who beats it, her curiosity and family’s need for money drive her to give the game a try. However, the game is more than just a simple choose-your-own-adventure meets horror campaign. It has the ability to warp reality and force Kayla to make deadly decisions that affect people in real life. Forced to continue playing, Kayla and her friend Isaac (Asa Butterfield) try to find a way to stop the game for good — it is just code after all. But as they learn of the malevolent forces that went into the game’s conception, they realize that winning and staying alive may not be as easy as they think. Choose or Die feels both nostalgic and fresh, paying homage to classic video games while delivering a narrative that hasn’t been done to death. Its short 84-minute runtime is an asset, not a hindrance, allowing the movie to dive straight into the horror without unnecessary fluff dragging it down. Choose or Die is honestly a lot of fun and a great casual watch for horror buffs and novices

Ouija: Origin of Evil (2016)
Mike Flanagan had already built a reputation as a rock-steady horror filmmaker by 2016, but the sense of “holy crap, this guy can do anything” became set in stone once he took on a prequel to a critically-derided movie about an evil ouija board and made one of the scariest movies of the last decade. Ouija: Origin of Evil takes us to the 1970s, where fake psychic Alice Zander (Elizabeth Reaser) and her two daughters, Lina (Annalise Basso) and Doris (Lulu Wilson), perform seances for paying customers in the wake of Alice’s husband dying. Doris, the youngest, spices up the act with the introduction of a ouija board, but the cursed item makes things all too real when it not only sends a dark spirit into the girl’s body but exposes the deep-seated evil ingrained in the Zander’s house. There is, to be very clear, absolutely no reason for Ouija: Origin of Evil to be good at all, so it’s a downright shock that it’s this horrifying and effective. And, because it’s Flanagan we’re talking about here, there’s also a potent dramatic heart beating underneath all those bumps in the night. –Vinnie Mancuso

The Babysitter (2017)
It’s a common trope: a little kid has a crush on their sexy teenage babysitter. But Netflix’s original flick The Babysitter turns that on its head, by making the hot babysitter also happen to be part of a Satanic cult. The cult – who has brought their ceremony into young Cole’s house – will stop at nothing to prevent Cole from spreading their secret. It’s not really a “scary” horror film; it’s more goofy, super gory, and a kind of throwback to the campy horror of the 1980s. – Alyse Wax

It Follows (2014)
This modern classic takes the old trope of girls getting slaughtered after a sexual encounter is turned on its head. Jay becomes haunted by a shadowy, supernatural figure after she has sex. Her partner finally explains that he passed it to her through their intercourse, making it the worst STD of all time. Jay must either pass off the ghost via sex with another man, or the demon will kill her and return to haunting the man who gave her the ghost. – Alyse Wax