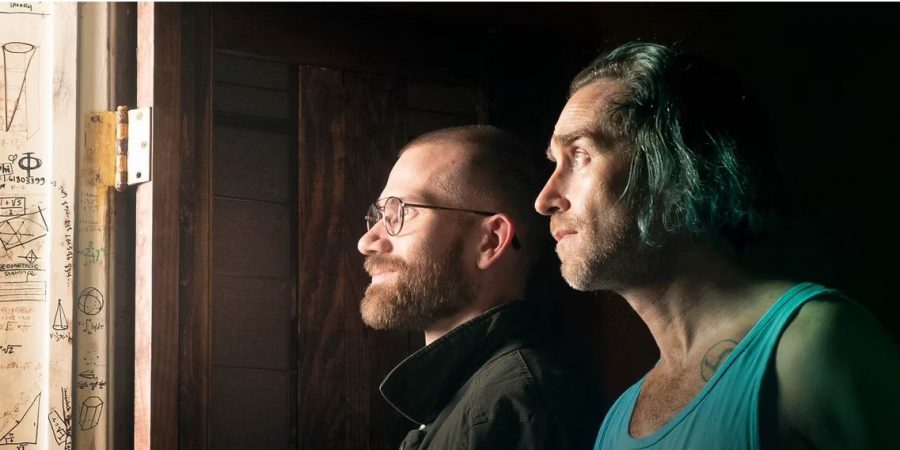 Human beings are in an uncomfortable position in the cosmos. Our sensorial apparatus is incapable of seeing or hearing everything that happens around us, while our nervous system can only process a limited amount of information. Yet, we are pattern-seeking animals that try to make sense of the things around us. It’s no wonder we are always trying to look for the meaning of everything, and frequently creating explanations for phenomena we can’t possibly understand. Justin Benson and Aaron Moorhead’s new movie, Something in the Dirt, is all about the search for meaning, a fantastic addition to their exploration of cosmic horrors.

Something in the Dirt follows two neighbors who band together to make a documentary after witnessing a paranormal event. The concept might not sound so different from Jordan Peele’s Nope, but while that movie was all about spectacle, Something in the Dirt is a slow-burn exploration of how every human spends their life looking for signs. First, we have Levi (Benson), a man who jumped in and out of correction facilities and never achieved much in life. Still, Levi is humble, optimistic, and makes a genuine effort to enjoy life as he can, knowing well his past make him toxic to most people. Then we have John (Moorhead), a narcissist and self-centered man who’s not doing so well in life either, but is certain that his intelligence and knowledge are meant to serve a higher purpose. From the very start of their relationship, it’s obvious Levi and John have nothing in common. Still, after seeing something they cannot explain, they look for signs together, hoping to unveil the secrets of the universe.

Levi and John’s quest is shared with the viewer, as we get to watch the duo working on the documentary and parts of the documentary itself, a fragmented structure that challenges us to wonder what’s real or not. Because if it’s clear that some supernatural force is at play, the breadcrumb trail the duo follows doesn’t always show a clear path. After all, eager to solve a cosmic puzzle, Levi and John might let their imagination fill gaps that don’t exist.

The essence of cosmic horror is the realization of human insignificance. We are no more than dust in the universe, even though we try to think we are each special somehow. So, when forced to interact with things we cannot control or understand, we realize how small we truly are. Something in the Dirt explores the struggle to bind unexplainable forces to our will, only to realize at every turn we might not be up to the task.

We cannot deny there are things that escape human understanding—that’s why science keeps moving forward, and always will. However, as pattern-finding animals, we refuse to let things go. So, when faced with something we cannot comprehend, instead of accepting our ignorance we try to find meaning by looking for clues that might not really be there. And blinded by our ego, we might even fabricate evidence to prove we are right. That’s precisely Levi and John’s journey in Something in the Dirt, a movie that uses a sci-fi accident to expose the workings of a human mind.

Both Resolution and Synchronic were about friendly love and using supernatural events as tools to save the people we love. The Endless explored brotherly love through shared trauma and the acceptance of things that exist beyond reason. Finally, Spring dealt with romantic love, a force of nature so incomprehensible that even reality-defying revelations cannot end it. However, there’s no love between Levi and John in Something in the Dirt. They are tethered by fate and remain together as long as isolation and a common goal push them to ignore the numerous red flags each raises before the other. As a result, Something in the Dirt stands out from Benson and Moorhead previous work. Not surprisingly, human contact turns out to be dangerous in Something in the Dirt, instead of empowering, a reflection of our recent pandemic history, when we learned to fear invisible menaces surrounding us and originated in other people’s carelessness.

As a movie conceived during the pandemic, Something in the Dirt is also an exploration of loneliness that takes place mostly inside Benson’s actual apartment. Isolated from the rest of the world due to their complicated background, Levi and John find in each other the only company they can get. And even though they are an awful fit, they do whatever they can to stick together, at least for a while. The other option would be to face alone a world that’s hostile, cruel, and deprived of sense.

Benson and Moorhead have always been able to make the most of small budgets and confined spaces. Nevertheless, Something in the Dirt is the most minimalist project they ever created. Yet Something in the Dirt might be their most ambitious movie, as they dedicate two hours to an intimate study of meaning as the main motor of human life. Meaning makes life move forward, connects us, and gives us energy to pursue new things. Meaning also separates us, creates conflict, and forces us to recognize our own ignorance. Meaning is humanity’s biggest power, but is also our greatest curse.