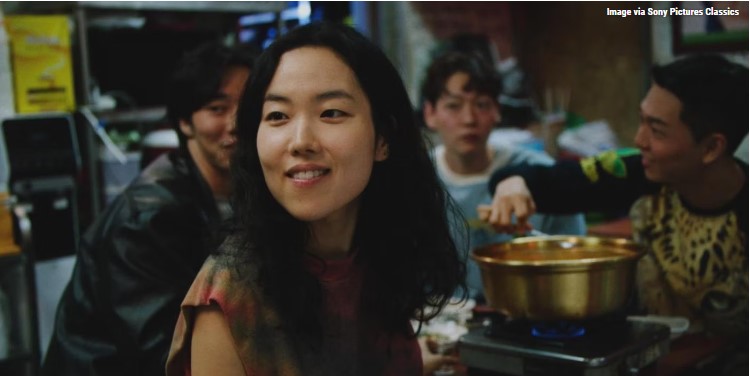 Early on in Return to Soul, the excellent film from Davy Chou, we see Freddie (Ji-min Park, in one of the year’s best performances) going out for drinks with some friends in South Korea. This is the first time she’s been back to Korea since she was adopted by her French parents, and she doesn’t seem to have a reason for her return visit, and she doesn’t even speak the language. She doesn’t know the customs, as she shows early on as she pours her own drink—apparently a no-no—and unites the several scattered groups into one larger one for a night of drinking. Even though this group states that she has a “typical Korean face,” she truly knows nothing about this place she was born into. She was born here, but Korea certainly isn’t Freddie’s home, at least in any way that feels like home to her.

After someone suggests Freddie should find her birth parents, almost on a whim, she goes to the adoption agency to learn about her mother and father. What begins as a seemingly aimless trip to Korea becomes a search for self, a coming-of-age story, and a reckoning with where Freddie came from and what that means for her present and future. Return to Seoul, also written by Chou, is an intricately constructed narrative that shows just how vastly and quickly one can change, yet our pasts stay with us forever—whether we want them to or not.

Return to Seoul covers several years in Freddie’s life, but only when she’s visiting Korea. On this first visit to Korea, she meets her biological father (Cho-woo Choi), who has started a new family, but deeply regrets that he ever let Freddie go in the first place. Freddie’s father wants a second chance that he can’t have, asking Freddie to return to her “home” of Korea, so that they can start again, get to know each other, and live under the same roof. Freddie laughs off the idea, but there’s something comforting in the idea of connecting to her roots, and we can see the seeds of this possibility starting to plant themselves within her.

On later trips several years apart, it’s almost as if Freddie is unexpectedly drawn to Korea, like a beacon that she must follow. Even though she’s changed her job or her style, she’s still that girl who was adopted and moved to France all those years ago. We revisit her return to Korea for her 27th birthday, self-destructive and wanting to ignore yet another year gone by. But it’s almost as if Freddie is trying to drink away the reminder that she could’ve had a fresh start, she could’ve stayed her over the last two years with her father, a completely different life that neither of them can ever get back now that it’s gone.

Chou’s story covers four different visits, and each time we revisit Freddie, she seems like an entirely different person, but regardless of how she changes, she always seems like she’s searching for something that she can’t quite find. Park gives an incredible performance in each of these segments, showing us both the outward appearance that she shows the world, and the vulnerability of the person that she truly is. Somehow, this is Park’s first role, and it’s truly remarkable how much Park gives the audience in saying so little. This is a role that asks Park to play a role within a role, and her every choice is not only captivating to the viewer, but essential to Freddie’s evolution and journey in attempting to find herself.

Chou shows us how many lives people can live over the course of one life, and still, the core can often remain the same. For example, when we meet Freddie’s father, he talks about how different he and Freddie’s mother were when they gave her up for adoption. It’s a pain that he still has to deal with, and a choice that Freddie’s mother also deals with in her own way. But by showing Freddie over the course of almost a decade, Chou also proves this to be true. Freddie’s parents were completely different people then, and the Freddie we see at the end of this film has vastly changed from the person that we began with, rearranging bars and pouring her own drinks.

Chou and cinematographer Thomas Favel show many different sides of Korea, from darkened bedrooms to secret clubs and fancy restaurants, but no matter where we are, Chou and Favel make this city alluring, a land of beauty in all its forms, to a point that we understand why Freddie is beckoned back to this area. Return to Seoul is also stunningly edited by Dounia Sichov, who seemingly knows exactly when to pull away from Freddie, and the film always leaves us wanting more—in a good way—whenever we jump forward a few years.

Chou has made a remarkable work about trying to return home when that home no longer exists, and trying to find one’s place amongst that confusion. In one particularly brutal scene showcasing her ability to restart, Freddie says to someone that she “could wipe you from my life with a snap of my fingers.” At this moment, we see a person who has had to start over again more times than she can remember, a person who has to start over almost as a survival instinct. In a snap of their fingers, her birth parents wiped her from their lives, but the impact still remained years later—which Freddie still has to figure out and reckon with, almost three decades after her birth.

South Korean film and television has been tremendous in recent years, from Squid Game to Burning and, of course, Parasite. What Chou is doing with Return to Seoul deserves to be recognized amongst these titles, and this absolutely makes him one of the most exciting filmmakers from South Korea to watch. Similarly, Park is giving one of the finest performances of 2022, a chameleon-like role that is shockingly her first performance. Return to Seoul is a powerful and quietly staggering work, and one of the most engrossing films of the year