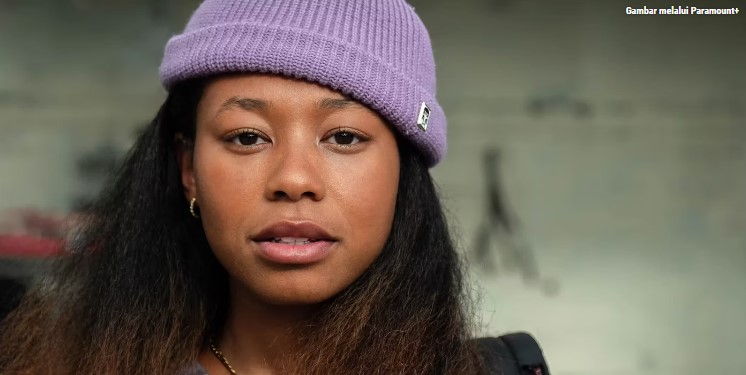 A familiar underdog story made engaging by the flashes of patience with which it approaches its material, Sanaa Lathan’s On the Come Up doesn’t reinvent the wheel as much as it tries to roll along with it. Adapted from the novel of the same name by Angie Thomas, who also wrote The Hate U Give, it works best as a star-making feature debut for Jamila Gray. She is the film’s best asset as Brianna ‘Bri’ Jackson, a 16-year-old phenom who battles her way through an underground rap scene to try to help her family who has fallen on hard times. She does so in search of stardom of her own by following in the footsteps of her late father after he made a name for himself many years ago. First making its premiere back at this year’s Toronto International Film Festival, it is a sincere yet sporadic work that never quite reaches the emotionally reflective heights it is reaching for as it frequently freezes up when it counts.

This is also how we first see Bri in action where she gets overwhelmed by the pressures of being in the ring against an opponent who goes straight for the jugular. She can’t find the words to respond and walks out, a tough start on a journey that is paved with challenge after challenge in the fictional city of Garden Heights. After selling “contraband” at her school, which is actually just candy, she gets violently slammed down by the on-site officer and smeared as being somehow responsible for what happened to her. This only makes her more determined to get back in the ring, especially after economic precarity comes knocking, and she needs to make a bankable name for herself. After finding some fleeting early successes, even holding her own while battling in the parking lot when the plot conspires to keep her out of the ring, Bri will then have to face down the pitfalls that come with newfound fame.

The greatest flaw of On the Come Up is how it becomes far too simplistic, both in the story itself and its presentation. Garden Heights rarely feels like a place with any texture to it. We don’t really get that many glimpses of establishing shots to ground us in the setting, instead cycling through a handful of locations that all feel far too confined. Thematically, even as it grapples with some more heavy subjects, it all is besought by a prevailing nervousness about fully delving into the darkness. Much of this is by design as it seems focused on playing to a bit of a younger audience and packaging the experience in something that is digestible to them. Unfortunately, this sells them and the film itself short as it preemptively constraints itself when it doesn’t need to. What complexities and challenges arise are artificial in how they are constructed, especially with how Bri herself is written as a character. She is clearly meant to be inexperienced with the world, but this can often make her remain painfully static

Central to this is an initially close relationship she has with her manager Aunt Pooh. Played by a woefully underutilized Da’Vine Joy Randolph, who has been killing it in everything from The Lost City to Only Murders in the Building, she soon completely vanishes from the film before popping up when it needs her to kick off a concluding conflict. The film does this by creating a rushed wedge between Bri and her, robbing it of any impact. In the span of only a couple of scenes, Bri decides to cut ties with Aunt Pooh and go with new management. Even as it is made clear that this is because of her need to get money as quickly as possible, this change of direction for herself lacks the emotional connection it should have.

Bri just gets whisked away to the big time, abruptly thrown into a world that will bring its own share of storylines that also don’t get fully excavated. From a brief queer romance that plays out as a glorified shadow of a subplot to some attempts at providing incisive observations about the corrupting nature of the music industry as a whole, all of it passes almost as quickly as it begins to take shape. It all lacks focus or direction as it shifts into a third act that pushes all the preceding narrative threads to the side. This makes it feel as though it is just going through the motions at a rapid-fire pace without ever taking the time to slow down and sit with what it wants to be. Ironically, just as Bri is struggling to figure out who she wants to be, so too is the film. For all its promise, it lacks compelling cinematic or narrative poetry.

What makes it impossible to dismiss entirely is just how committed Gray is to this character. She is able to bring the necessary charisma to the surprisingly few rap scenes we get as well as a prevailing vulnerability when she steps off the stage. A handful of quieter character scenes towards the end see her elevate the experience when it desperately needed her to. Each of them feels like a breath of fresh air for just how patient they are. That they inevitably get interrupted by the plot rushing back in is then all the more unfortunate. There are two films in tension with each other as one seems to want to be more character-driven and nuanced while the other is built around a haphazard plot that threatens to crowd anything else out. The pieces will occasionally arrange themselves into more grounded reflections, but not enough to do justice to the characters on the whole. It lacks the necessary cohesion and confidence to carry it through an increasingly scattered story. Despite a plethora of potential in the characters, On the Come Up is not able to rise to the heights it needed to.