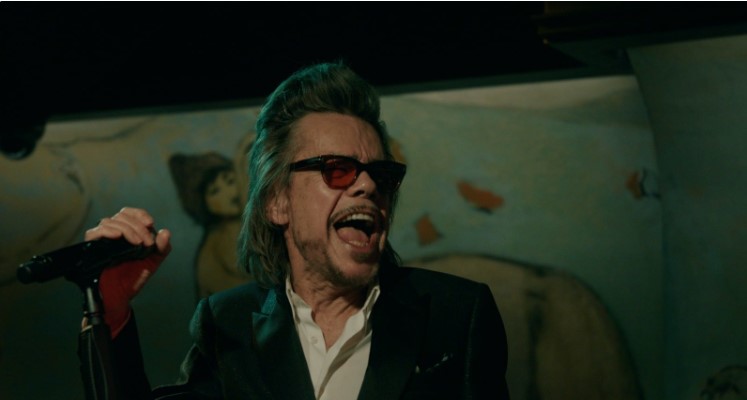 As usual, the New York Film Festival showcased a slew of documentaries this year. Their topics ranged from in-depth looks at celebrities to probing examinations of prescription drug fraud and slavery. The festival’s centerpiece was the Venice award-winning Laura Poitras documentary, “All the Beauty and the Bloodshed,” a film that consisted of two powerful narratives that never cohere. Each is still compelling enough to make it worth a look. Here are some comments on three other documentaries making their world premiere debuts as the NYFF celebrated its 60th anniversary.

Director Martin Scorsese is back on the doc scene with “Personality Crisis: One Night Only,” a loving look at the career of David Johansen interspersed with loads of concert footage from his 2020 show at Café Carlyle. Actually, this concert features Johansen’s very different alter ego, Buster Poindexter, whom he created years after his initial fame as the lead singer of The New York Dolls. There’s no live rendition of the extremely pompadoured Poindexter’s biggest hit “Hot Hot Hot,” which Johansen calls “the bane of my existence.” Instead, Poindexter sings songs written or co-written by his creator, including a few made popular by the Dolls.

Scorsese and his co-director (and editor) David Tedeschi occasionally interrupt this concert film with old clips of Johansen on talk shows, a contemporary interview done by the singer’s daughter, and footage of old performances of the songs Poindexter will sing to the audience at the Carlyle. Johansen, whose leonine visage should immediately replace the crappy CGI lion in the current MGM logo, is an entertaining showman throughout. Rummaging through his alter egos and former bands, he provides some backstory for those unfamiliar with his music.

For example, he attributes the New York Dolls’ reputation as the forefathers of punk music to an unfortunate, onstage mass puking in Newcastle, UK. The band’s attire—they’re said to “look like male prostitutes”—and the fact these men referred to themselves as “dolls,” was an even more punkish act, especially in 1972. Johansen quips that he was once arrested for “looking like Liza Minnelli.” “Personality Crisis: One Night Only” points out the influence of the band on groups like The Ramones and on the singer Morrissey, who back in the day was the president of the New York Dolls fan club. Morrissey briefly appears as a talking head here. Make of that what you will.

“They don’t call it working music,” Johansen says when describing his philosophy about his job. “The call it playing music.” And there is certainly a lot of that in “Personality Crisis: One Night Only.” The bulk of the two-hour runtime is the Café Carlyle performance, recorded in January 2020 just before the pandemic turned New York City into a ghost town. The songs run the gamut from boisterous to heartbreaking, and Johansen (as Buster Poindexter) handles each with amazing vocal and interpretive skill. The camera stays close to him, often framing his performances in close-up, creating the intimacy that must have been felt by the fans and friends who attended this concert. Scorsese and Tedeschi share this love; it’s evident in every frame of this documentary. Alas, the common man will have to wait until 2023 to see this when it premieres on Showtime.

Every year, the NYFF has a documentary that’s so niche I hesitate to recommend it even if I rather enjoyed the work. I’m reminded of “The B-Side,” the Errol Morris doc about gigantic Polaroids from a few years ago. This year’s entry in that category is “A Cooler Climate,” James Ivory’s memoir-tinged nonfiction film about his visit to the Afghanistan of 1960 and the footage that resulted from that journey. The 94-year-old Ivory narrates, and as co-director (with Giles Gardner) he’s responsible for putting together the often fascinating images of a country that no longer looks as it does here. The quiet narration is supplemented by an enjoyable score from the prolific composer, Alexandre Desplat.

I don’t mean this to sound derogatory, but “A Cooler Climate” plays like one of those PBS documentaries they used to run during Pledge Month in the 1970s. Had Bob McGrath interrupted the movie to tell me to get my mother so she can write a check to keep “Sesame Street” on the air, I would not have been surprised. The Afghanistan footage has enough intrigue to pull you in, but it’s a rope-a-dope to get you to sit through what is essentially a very famous director’s home movies. Additionally, Ivory is so reserved in his storytelling that he comes off holding his cards too closely to his vest.

We do learn that Ivory’s father provided timber for sets on the MGM lot, and that he once asked for a dollhouse as a kid. That latter request earned him some scorn and derision from adults, even though Ivory’s desire for the building was due to his interest in design, not his homosexuality. “A Cooler Climate” hints that this trip to the Middle East was an experiment to see if Ivory could more freely explore his sexuality than he had been in his hometown in Oregon. But even that interpretation of potential enjoyment feels doubtful. In his review, Dan Callahan comments that the younger Ivory we see in the footage “often looks like he is in pain, and his face also shows a deep amount of anger and resentment.” This doesn’t make him the most entertaining of tour guides.

At 75 minutes, “A Cooler Climate” doesn’t wear out its welcome. Yet it ends just as things are truly getting interesting. Ivory has just met and collaborated with his longtime partner, Ismail Merchant, and they’ve made a film written by Ruth Prawer Jhabvala, the writer who would win two Oscars for her work with them. Granted, this isn’t what the film is about, but it hints at the triumphs we know will come, successes that the viewer will be denied witnessing. As I sat in the Walter Reade Theater collecting my conflicted thoughts after the lights came up, I ultimately concluded that I was being ridiculous for complaining that James Ivory made what is essentially a Merchant-Ivory movie. Your enjoyment will hinge on that