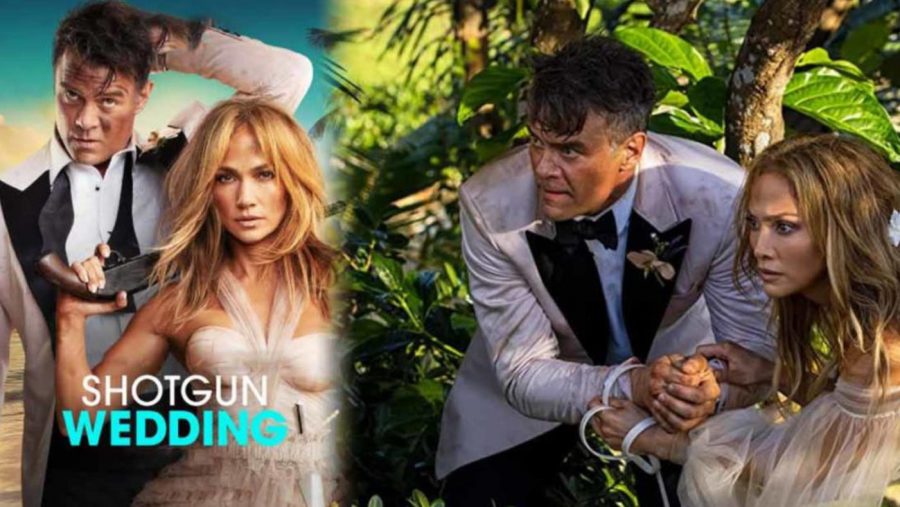 It may be a little absurd that a wedding day is spoiled by a group of pirates. Actress and Singer Jennifer Lopez is about to be seen in an action yet comical movie Shotgun Wedding that is set to be released on Prime video on 28 December 2022.

The movie goes on with lots of humor, drama, and action; with Jennifer Coolidge, the movie is going to be filled with laughing gigs.

Prime Video released the trailer for Shotgun Wedding in October. The trailer introduces us to the beautiful couple from the film, Darcy (Jennifer Lopez) and Tom (Josh Duhamel), who is about to have the island wedding of their dreams. Of course, no special day is complete without the couple’s eccentric families, a handsome ex on the guest list, and cold feet, but it’s probably just butterflies.

Things take a turn, when a group of dangerous pirates shows up uninvited, hijack the wedding procession and wreak havoc. However, Darcy and Tom are not going down without a fight.

From carrying a live grenade through the dense forest to firing a shotgun from the roof of their car, the couple must hold hands to save their loved ones before it’s too late.

Darcy and Tom gather family and friends for a memorable wedding on an exotic island. Towards those sacred moments, disaster happened. Darcy and Tom’s wedding ceremony is raided by a band of pirates who are holding the guests hostage.

Instead of giving each other promises of loyalty, Darcy and Tom have to save all the invited guests whose lives are in danger. Can the two of them work together to defeat the criminal gang and carry on with the pending wedding ceremony?

The thrilling romance story of Darcy and Tom is present in the film Shotgun Wedding. The film, directed by Jason Moore, is already showing in Indonesian cinemas. The main attraction of this cinema is of course the characters involved, especially the main character Jennifer Lopez aka JLo.

Not only relying on her charms and star aura, JLo also plays the character Darcy, who is hilarious and very animating. In the process of saving their family, Darcy and Tom rediscover why they love each other.

Another interesting thing about this film is the romantic comedy genre combined with action elements. The action portion in the film is not just a distraction, but quite tense and realistic, of course, with a hint of humor wrapped around it.

The drawback, the plot of the film is too predictable. However, it’s only natural because listening to romantic comedies really doesn’t need to frown a lot. Just sit back and let the characters in this film entertain themselves with their various conflicts.

Some scenes in the film are difficult to make sense of, but it doesn’t seem to matter. Unfortunately, this 100-minute film is labeled for audiences 13 years and over. In fact, there are quite a number of scenes and dialogues whose humor is too mature to be listened to by teenage audiences.

A second trailer or goes by the name, “a holiday cut,” was released on December 7, giving us another look at all the profanity, laughter, and violence that Shotgun Wedding promises to be full of.