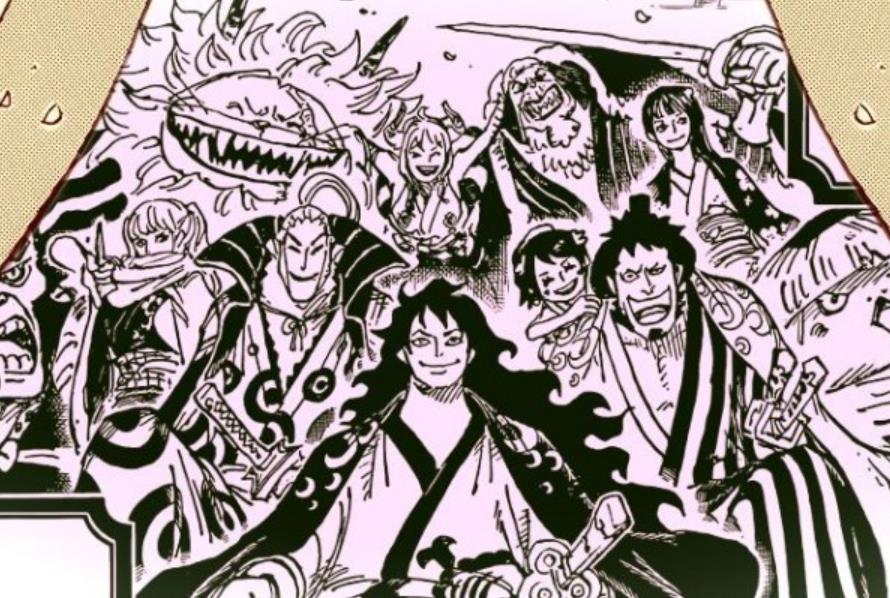 One Piece 1057 Discussion: The Curtain of the Wano Stage Finally Closes!

Finally One Piece 1057 closes the curtain on Wano’s story! How is Yamato’s status as a member of the Straw Hats? Let’s see the full review in the discussion of One Piece 1057 below!

Caesar Clown suddenly gets involved in the Katakuri-Oven battle against Germa 66 in the cover story of One Piece 1057.

Caesar’s involvement is probably to be expected if you remember him being on the cover of chapter 1052.

Is here Caesar Clown intending to bring down all parties in order to escape in the midst of chaos, or does he want to help the Vinsmoke to escape with them?

What is clear, the presence of Reiju is likely to be able to neutralize the poison on Vinsmoke’s side so that Caesar Clown might finally escape from Whole Cake Island after being trapped for a long time!

Oda delivered something surprising, and perhaps disappointing to some fans, at the start of One Piece 1057.

Maybe for some fans, Yamato’s decision makes sense considering that there doesn’t seem to be a suitable position for Yamato.

Unfortunately, Yamato’s decision was too sudden so that not a few readers ended up disappointed with him. Moreover, until One Piece 1057 was released, there was absolutely no sign of Yamato wanting to stay in Wano.

Not to mention the reason Yamato wanted to stay in Wano was to adventure around Wano like Oden, something he should have considered long ago considering that Yamato idolizes Kozuki Oden so much.

This strange reason makes Yamato’s cancellation of joining the Straw Hats feel forced and too sudden.

How about you, are you among those who like Yamato’s decision to live in Wano?

Momonosuke along with Kin’emon and Yamato seemed to rush into the harbor to catch up to Luffy and the others.

We are briefly shown the memories of Momonosuke since meeting Luffy, so we can better understand why Kin’emon and Momonosuke seem so angry at Luffy and the others for not saying goodbye to them.

There’s a bit of a funny scene when Kin’emon questions the reason they don’t fly, which of course is because Momonosuke is still afraid of heights.

Then as soon as he arrived in front of Luffy, Momonosuke seemed to cry loudly and begged Luffy not to leave him.

The conversation between Luffy and Momonosuke here is touching, and this is arguably the best part of this chapter.

Luffy says that he considers Momonosuke like his younger brother, similar to how Whitebeard regards Kozuki Oden as his brother and not as his son like the rest of the crew.

Luffy finally acts like a Yonko by giving his flag to the Shogun. Luffy then declares Wano under his protection!

Interestingly, the way Luffy said it seemed to make Momonosuke’s position also considered a member of the Straw Hat group.

This will almost certainly be a big sign that Kozuki Momonosuke and Wano will be part of Luffy’s allies in the final war!

At the end Luffy said that if Yamato, Kin’emon, and Momonosuke wanted to be pirates, he would pick them up as fast as lightning. Does this mean Luffy and the Straw Hat crew have their Vivre Cards?

After Luffy decides to sail away from Wano, we are shown the interaction between Luffy, Law, and Kid which is still full of competition.

Even in their farewell, Kid heated Luffy and Law into taking a more dangerous path even though none of their crew actually agreed.

At the end of One Piece 1057, Oda makes Hiyori the end of the narrative by saying that “Kurozumi” which means “coal” was born to be burned!

Of course this is a reflection of Kozuki Oden’s punishment by Orochi and Kaido in the past, but it was Oden himself who said that Oden was born to be boiled.

Hiyori’s statement is not only a closing that reflects her revenge against Orochi, but also a declaration that Orochi’s despotic rule is over!

Then if you pay attention, Shinobu and Yamato now seem to be in the ranks of the Kozuki Clan followers as if replacing Izo and Ashura Doji who have died and complete the nine members of the Akazaya Nine!

Remember, previously Kanjuro who was originally also a member of the Akazaya Nine was revealed as a traitor shortly before Izo came and fought together with Kin’emon!

Oda then officially ends the Wano Act by closing the “curtain”, as Oda used to start at the beginning by opening the same curtain.

Overall, we think Wano Chapter has a lot of cool scenes and unexpected plots.

Even so, it’s hard to say this Wano Chapter has a better story than other parts in the One Piece story.

Even though Wano can’t be called the best chapter, we believe this Wano Chapter has many important important moments that are crucial to the overall One Piece story!

Starting from the scene “Roger laughs” to the defeat of Kaido, there are not a few tense and touching scenes throughout the Wano Act.

In your opinion, how was the Wano Round as a whole? Do you like the adventures of Luffy and his friends in Wano?