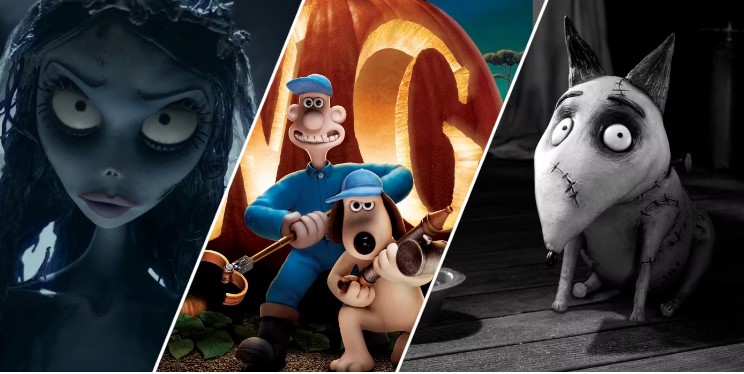 Stop-motion has become increasingly popular over the years, with the filmmaking technique providing a unique style that separates it from traditional animation. Usually using puppets, though in theory anything could be used, the objects are slowly moved in tiny increments, catching each movement one frame at a time. It is a very time-consuming style, but the effort is worth it when it all comes together in post-production.

Laika and Aardman are the two most famous stop-motion animation studios, producing beloved movies and shows such as Chicken Run, Kubo and the Two Strings, and Shaun the Sheep. Stop-motion is uniquely suited to animation in the horror genre, with its stuttering style able to perfectly represent an unsettling tone. While most of the below films are family-friendly, they are still suitably spooky and perfect for a Halloween movie night with children or those young at heart.

Produced and written by Tim Burton, The Nightmare Before Christmas carries his signature dark style, while remaining accessible for children. Also, a great spooky musical, the songs in the film have been covered by many famous artists over the years, while a singalong version has been released on DVD and is also available on Disney+.

When a giant herbivore beast terrorizes their village on the eve of its annual vegetable growing festival, the duo are called upon to save the day. Their days job as pest control agents prove futile, however, as the titular were-rabbit plaguing the town proves to be a more significant threat than they could have imagined.

‘Alice’ (1988)
A dark retelling of Alice in Wonderland, Alice is more in line with the original fairy tales than the watered-down Disney versions. A combination of stop-motion and live-action, the movie follows the titular Alice as she follows a white rabbit into Wonderland, where she is confronted by a series of unsettling sights.

Less a fairy tale and more a nightmare, Alice is full of surreal imagery as it hits the familiar beats of the story while putting its own twisted spin on proceedings. Directed by Czech filmmaker Jan Svankmajer, mostly known for his animated shorts, Alice is packed with his signature creepy stop-motion storytelling.

‘ParaNorman’ (2012)
A family-friendly zombie movie, ParaNorman follows Norman, a gifted young boy who is able to communicate with the dead. After a series of supernatural occurrences result in the dead rising from their graves, Norman and his friends must break the curse in order to save their town and their families.

The best zombie movies contain some degree of social commentary, as seen in Night of the Living Dead. This tradition is continued in ParaNorman, with the film’s focus on themes such as acceptance and tolerance especially important for its target market of young viewers.

‘The Boxtrolls’ (2014)
Laika’s follow-up to ParaNorman, The Boxtrolls follows Eggs, a human boy who was raised by the trolls that live underneath a Victorian era city. When the kind-natured trolls are targeted by a vicious exterminator, Eggs teams up with royal daughter Winnie to protect his family from the humans who live above.

Featuring an all-star voice cast that includes Ben Kingsley, Elle Fanning, and Simon Pegg, The Boxtrolls is an entertaining fantasy-adventure that can be enjoyed by people of all ages. While not Laika’s strongest offering, the movie is still a worthwhile watch and makes for a good double feature alongside one of their other classic stop-motion films.

‘The House’ (2022)
A recent Netflix release, The House began life as a miniseries before pivoting into an anthology film. Revolving around one home, the movie tells three different tales all set within its walls. Each segment is written and directed by a different creative team, and contains characters ranging from humans to anthropomorphic cats and rats.

While the different segments all tell their own surreal tales, they are all connected by The House’s unique and often disturbing visual style. Even when its characters are animals its focus on themes such as obsession and the pursuit of happiness feel touchingly human. The House is available to stream on Netflix.

‘Frankenweenie’ (2012)
Tim Burton’s take on Frankenstein, Frankenweenie follows young scientist Victor Frankenstein. After his beloved dog Sparky is killed in a car accident, Victor brings his best friend back to life using electricity. While Victor is overjoyed to have Sparky back, it leads to a series of events that puts the whole town in danger.

Frankenweenie is one of Burton’s most touching movies, with the core of its outlandish tale being about the wholesome relationship between a boy and his dog. Anyone fortunate enough to have a four legged friend will find themselves running to their pet for a hug once the credits roll. Frankenweenie is available to stream on Disney+.

‘Corpse Bride’ (2005)
Another hit from Tim Burton, Corpse Bride sees the celebrated director’s signature gothic style on full display as it weaves its supernatural romance. When Victor (Johnny Depp) accidentally places a wedding ring on a corpse’s finger while practicing his proposal, he is whisked away to the land of the dead by his new bride, Emily (Helena Bonham Carter).

Like all of Burton’s best work, Corpse Bride contains a touching message beneath its macabre visuals. Focusing on themes such as love and death, the movie is a sweet journey through the afterlife as both Victor and the audience learn more about themselves. Corpse Bride is available to stream on HBO Max.

‘The Wolf House’ (2018)
One of the most acclaimed recent horror movies, The Wolf House is presented as an indoctrination video created to draw viewers into the cult that produced it. Originating from Chile, the film follows Maria, a woman who escaped the cult and who takes refuge in a strange house.

Maria soon discovers the house reacts to her feelings, and it becomes a nightmarish realm that contains endless horrific sights. The Wolf House is made especially unsettling thanks to its stop-motion visuals, containing a relentless unnerving atmosphere as more and more dark sights are thrown at the viewer. The Wolf House is available to stream on Shudder, AMC+, and Tubi.

‘Coraline’ (2009)
Based on the novella by Neil Gaiman, Coraline follows its titular character as she discovers a parallel universe through a portal in her new home. Enjoying her interactions with the more caring versions of her parents in this dimension, she soon discovers this new realm contains some terrifying secrets.

Directed by The Nightmare Before Christmas’s Henry Selick, Coraline captures that film’s surreal stop-motion style while offering a more human story. Despite its dark animation that will serve as nightmare fuel for young children, Coraline’s core is about a young girl searching for acceptance as she is growing up with parents who seemingly treat her as an afterthought.