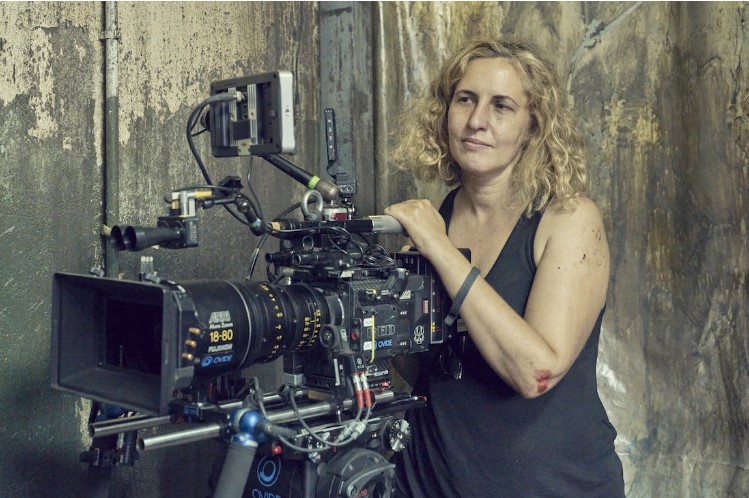 Adapted from her Goya Award and Forqué Award-winning short film of the same, Carlota Pereda’s “Piggy” is an unflinching look at coming-of-age in the era of cyberbullying, wrapped inside a chilling slasher package. Featuring a star-making lead performance from Laura Galán, reprising her role from the short, Pereda’s gruesome film debuted in the Midnight section of this year’s Sundance Film Festival.

“Piggy” follows lonesome teen Sara (Galán) as she works in her parents’ butcher shop over the summer break. Because of her appearance and the occupation of her parents, she endures vicious bullying—both online and, violently, in person—from the village’s other teens. The appearance of a murderous stranger shakes the village to its core, and pushes Sara into a life-altering moral dilemma.

Shooting on location around the village of Villanueva de la Vera and in a tight Academy ratio, Pereda combines the psychological tortures of girlhood with the grisly violence of the slasher genre to examine who the real monsters are. “Piggy” subverts expectations for what vengeance can look like on screen.

For this month’s Female Filmmakers in Focus column RogerEbert.com spoke to Carlota Pereda via Zoom about matching a film’s form to its themes, finding inspiration in the human body, and the exciting class of female filmmakers coming out of Spain today.

The opening sequence in the butcher shop is so visceral with the visuals and the sounds. It’s so squishy, and the pig’s head staring at you. What were you hoping to instill in the viewers in that first sequence?

I wanted to have something that was very organic, and that has to do with the themes of the movie, and also that was disturbing, but disturbing from a natural way without having to delve into horror. Normally in horror movies the first thing you get is a killing or something like that. I wanted to be very realistic, but oddly perturbing. Also, my best friend grew up in a butcher shop, and the fact that you’re surrounded by all that it really marks you. I thought it had to do a lot with the theme of the movie.

What would you say is the overarching theme for you, that you hope viewers get from the film?

You know, that’s one of the questions that I’m not going to answer because I think the viewers should answer the question for themselves because the audience is one of the main characters in this movie. They’re always involved in the discussion. They’re always involved in the storytelling. If I answer the question, it’s like I killed the movie. A lot of directors nowadays, I feel like they discuss their movies like a disclaimer. They don’t want to be misunderstood. I don’t mind being misunderstood. I want people to think what they want of the movie, but make it their own.

I love that. Leaving it open to interpretation. For me, one of the themes that I noticed and that I felt was handled really well, was the juxtaposition between the online bullying that happens to Sara and the violent in-person bullying, and how they are sort of entrenched together. Because you see the Instagram post and you think, Oh, it’s just a picture, it’s fine. But then you see how that leads to more violent altercations that happen to her. Could you speak a bit about what led you to include specifically the Instagram bullying?

That’s one thing that changed from my days when I was bullied. Now they’re bullying continuously online, so there really is no safe space. You go home and the bully continues online and you’re basically surrounded by a world that becomes smaller and smaller. Of course, the internet also makes you able to connect with people that think like you, but it also can be dangerous too. And I thought that was very, very oppressive.

I loved the costuming on Sara, in particular the way that at the beginning of the film she’s often in a baby pink, a kind of flesh pink, and by the end obviously, I don’t want to spoil, but she’s in this rich dark red color. Could you discuss how her costumes sort of reflect her journey?

The whole movie is the arc of her character. We feel everything has to do with her arc. The way we shot the camera, the colors on the screen, the set design and the costumes of course. So you can say that at the beginning she is a child. So we thought, Arantxa Ezquerro, who is the costume designer, we discussed how Sara comes from a small village, and we discussed how there are no shops in small villages in Spain. You get what you can buy in the market, which comes once a week and that’s it. So she’s not able to go to Madrid to buy food or to buy clothes. She just buys the clothes that are available to her mother, who’s going to be the one who buys the clothes for her. There’s this the evolution of the character and the end and one of the main inspirations costume-wise at the end of the movie, for our costume designer was Lara Croft.

You mentioned the camera as well. Obviously it’s shot in the Academy ratio that is so tight on the characters at all times. What was the decision to film in that ratio?

It was because of that. Everything that had to do with the theme and form are linked. So I discussed that a lot with my DP Rita Noriega. First we used it in the short film, because of that, because it is more centered on the body, it is more claustrophobic. It reminds us of our childhood days. And of course the younger kids even it reminds them of Instagram as well. But I was a bit scared when we were making the movie, that maybe they’re gonna think that this gimmick. But then of course, Robert Eggers did it for “The Lighthouse” as well. And even Zack Snyder [with the Snyder Cut of “Justice League”] did it, so it’s no longer something that is going to really take the attention from the movie. Because I didn’t want the form to take the attention from the movie, because sometimes if the form is too out there, it can distract from what you want to say.

I’d love to talk about the sequence at night. Even though it’s so dark, you really are able to feel the panic of the mothers and the panic of Sara and the creepiness of the guy. Can you talk a bit about how you filmed that sequence?

It was tricky. I mean, literally, I really had to think about that. I like darkness, but I didn’t want to have a full moon. I wanted the darkness to be dark, a bit like the underwater scene in a sense, where anything could happen in this almost liquid darkness. So it was taxing on Rita because she really had to think about that. I’m also a very visual writer, and I like the idea where there was complete darkness but then there are sparks of color that will let you look at things, almost like this theory about what is going on.