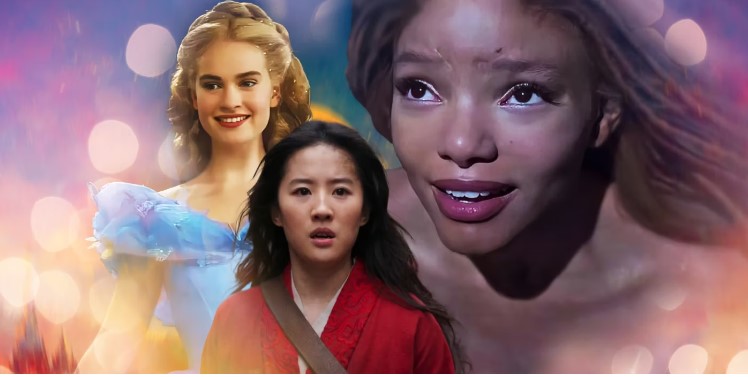 Since the release of their first feature-length film in 1937, Disney has made princesses a priority. The Disney Princess franchise is one of their most recognizable. But in recent years, Disney has been taking these classics and remaking the as live-action films. With the release of the live-action The Little Mermaid teaser trailer, Disney is continuing to add adaptions to this already lengthy list. Each new remake brings a different twist to the familiar story in order to build upon the original. Though some are more distinct than others. With a variety of added characters, new takes, and even extra songs mixed in with the stories everyone knows and loves, Disney has made a new line-up of princesses.

The trend began in 2014 and to date, five of the thirteen Disney Princesses have been redone. But Disney shows no signs of stopping. Two more adaptions are confirmed to be on the way in the near future. Disney’s live-action princess films are simultaneously familiar and different to long-time Disney Princess fans. But it can be hard to keep up with which films have been made when the titles are already so recognizable.

Disney’s princess remakes struggle to respect the classics while making the story their own. It is impossible to satisfy all fans, but they have tried tirelessly. In the last eight years, Disney released six live-action princess movies and there are more to come. With any luck, The Little Mermaid and Snow White will find a happy balance between old and new that will allow them to tell their own story while maintaining the nostalgia that comes with a remake.

Maleficent (2014)
Kicking off the remake craze, Maleficent told the story of Princess Aurora with one key difference. In this version, the story is told from the perspective of Maleficent, the iconic villain from Sleeping Beauty. Still the adaption most removed from the original, Maleficent stars Angelina Jolie as the titular character. The film attempts to garner sympathy for Maleficent as it tells the story of the fairy starting when she is young. She becomes the protector of the fairy kingdom, which is at war with the neighboring kingdom. Maleficent is betrayed by her ambitious childhood friend Stefan (Sharlto Copley) who cuts her wings in order to become king. Years later, Stefan has a daughter. As seen in the beginning of the original film, Maleficent curses the princess. But over the years, she watches Aurora (Elle Fanning) and Aurora comes to think of Maleficent as a fairy godmother. The events of Sleeping Beauty play out much the same, but it is the love parental between Maleficent and Aurora that save her from the curse. In the end, Aurora becomes queen and Maleficent gives her the power to unite the fairies and the humans. By tackling the story from a different point of view, it changes key moments, showing that however clear it may seem, no one is the villain in their own story.

Cinderella (2015)
The next princess film to be brought back to theaters was Cinderella in a much more familiar retelling. The star-studded film includes Lily James in the title role, Richard Madden as the prince, and Cate Blanchett as the Stepmother. This adaption chose to cut the songs from the original, though, unlike Maleficent, the plot points remain mostly the same. Orphaned Cinderella is forced to be a servant to her stepmother. In this version, as Cinderella hides from her family, she meets a hunting party including the prince. Only after this does he throw the ball where he is specifically looking for her. Cinderella goes to the ball with the help of her fairy godmother (Helena Bonham Carter) and dances with the prince. She loses her slipper and the rest is history. The live-action film chooses to downplay several roles, most notably: the mice. Jaq and Gus do not talk to Cinderella. Though this removes some whimsy from the story, the mice appear, so they can fulfill their role in the story, just with less humor. This version also spends more time developing Cinderella’s character and her relationship with the prince. The adaption isn’t the same as the 1950 version, but Disney built on the foundation of the original beautifully.

Beauty and the Beast (2017)
In 2017 Beauty and the Beast became the first live-action princess movie that felt like a true remake. It used all the same characters, the same music, and added to the story rather than changed it. The film shows book-loving Belle (Emma Watson) trapped in a small town where she doesn’t fit in. When her father (Kevin Kline) angers the mysterious Beast (Dan Stevens), Belle volunteers to prisoner in her father’s stead. Over time, Bell and the Beast learn to love each other, and that love turns the Beast and his servants back into humans. The plot is basically the same as the 1991 version. The remake features a magical book that allows Belle and the Beast to travel as a way to show them spending time together, but this addition is more confusing than anything else. In these travels, the film attempts to give a backstory to Belle’s mother, but it seems unnecessary. The live-action version does expand the role of Gaston (Luke Evans), making him a much more threatening villain. The new film did everything it could to retain the magic of the original, and in many ways, it succeeded. Ian McKellen’s Cogsworth and Ewan McGregor’s Lumière play off each other to maintain the humor expected from those roles. But perhaps, the film should have done more to differentiate itself. Of the two, why pick the new one over the 1991 version everyone fell in love with when they are so similar?

Aladdin (2019)
Next came Aladdin. This remake faced many of the same problems as Beauty and the Beast. The film tried to set itself apart by expanding Jasmine’s role. The film still follows Aladdin (Mena Massoud) as he finds Genie’s (Will Smith) lamp and masquerades as a prince to try and impress the princess. But it also shows Jasmine (Naomi Scott) trying to convince her father to give her more power rather than her simple not wanting to marry a stranger. Jasmine is given a friend Dalia (Nasim Pedrad). As in the original, Aladdin and Jasmine fall in love, Jafar (Marwan Kenzari) schemes for power, and the Genie’s power is the key to restoring peace. While the extra focus on Jasmine brings a lot to the film, it feels disjointed with the plot points borrowed from the original. Genie’s role is also expanded in the form of a romantic subplot with Jasmine’s friend, which comes off as forced. However, the live-action Aladdin does a marvelous job turning the sets and costumes into a spectacular fantasy world deserving of the original film.