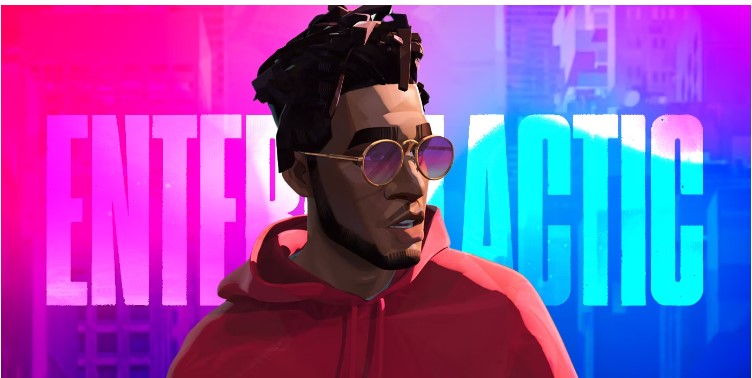 From A Hard Day’s Night by The Beatles, Intersella 555 by Daft Punk to Lemonade by Beyoncé, more and more visual albums are being produced by musicians who want to tell their album’s stories through the powerful medium of film.

Rapper Scott “Kid Cudi” Mescudi, though, is trying something totally new. He created the adult animated television special Entergalactic based on his upcoming album of the same title.

Director Fletcher Moules, whose Clash of Clans adverts have received over 700 million YouTube views, will direct. And DNEG, the animation studio that won an Academy Award for Dune and is Emmy-nominated for their visual effects on the fourth season of Stranger Things, is creating the animation. According to Netflix, the music-focused special “blends notes” of the Oscar-winning Spider-Man: Into the Spider-Verse and HBO’s Emmy-winning dramedy Insecure.

No wonder Cudi can’t contain his excitement. Entergalactic has been three years in the making and Cudi says it’s “the greatest piece of art” he’s ever created. There’s certainly plenty to get excited about. Here’s everything Entergalactic we know so far.

Is There a Trailer for Entergalactic?
Netflix released two trailers in June 2022. The first trailer reveals Entergalactic’s impressive cast and tells the story of two young artists Jabari (Cudi) and Meadow (Jessica Williams) meeting and falling in love in New York City. The sneak peek also features Cudi’s “Do What I Want” track off his forthcoming Entergalactic studio album.

The second trailer announces Entergalactic’s release date. The thirty-second clip shows Jabari smoking a cigarette on a couch, the smoke transforming into the special’s logo. A TV screen reveals the credits and the September 30, 2022 release date.

The full trailer was released on September 12 and gave fans their first good look at the story of the special and its characters as Jabari, fresh off a failed relationship, sparks a connection with his new neighbor Meadow.

Who is Among the Voice Cast of Entergalactic?
Scott “Kid Cudi” Mescudi plays Jabari, a charming, creative visionary who is also a goofball, just one of those kids you cannot help but love. Effortlessly cool, he is dressed head-to-toe in the coolest streetwear. At a first-time crossroads of career success and the perfect apartment, he is about to find the final piece of adulthood: his true love who happens to be his neighbor Meadow, a rising photographer played by Jessica Williams (Love Life). Meadow is described as the coolest girl at the party and also the most real. Timothée Chalamet (Dune) plays Jimmy who is Jabari’s best friend and weed dealer, though with the new drug laws he’s now focusing on crypto and new inventions. An oxymoronic, laid-back conspiracy theorist, Jimmy is never without a blunt and a book. Ty Dolla $ign plays Ky, Jabari’s irreverent, and at times, inappropriate road dog. Ky is always there for Jabari, even though his support can sometimes come in interesting packages. Laura Harrier (BlacKkKlansman) plays Carmen, Jabari’s recent ex-girlfriend. Stylish and confident, Carmen is the girl you’re supposed to marry. Vanessa Hudgens (Tick, Tick…Boom!) is Karina, the trustworthy, grounded, and adorably pregnant best friend of Meadow.

Also in the star-studded cast are Christopher Abbott (On the Count of Three) as Reed, a well-dressed shark with a heart, and an art dealer representing Meadow’s photography. Reed has the kind of chin that is sharp enough to cut glass but not strong enough to take a punch. 070 Shake plays Nadia, Meadow’s associate from the art scene. Born and raised in New York City, Nadia is an in-your-face sculptor whose voice could only be drowned out by the brashness of her own work. Jaden Smith (After Earth) is Jordan, an adolescent BMX superstar whose talent earns a pass to kick it with Jabari and Jimmy. Jordan sees the dating landscape in New York City just a bit differently than Jabari. Keith David (21 Bridges) is Jabari’s superhero creation Mr. Rager. Teyana Taylor (Coming 2 America) plays Boxing Coach, Meadow and Karina’s hard-nosed boxing instructor at Rumble NYC. Arturo Castro (Broad City) is Len, an upwardly mobile professional who is Jabrari’s co-worker at Vision Comics. He wears hard-bottom shoes and a newsboy cap. He’s super smart but also super annoying. Macaulay Culkin (Home Alone) is Downtown Pat, a downtown legend and life-long, city-wide delinquent. Despite his gritty exterior, Pat has a very romantic heart and wise words to give.

What’s the Plot of Entergalactic?
Entergalactic’s trailer does feel like a love letter to New York. Cudi was 20 years old when he bought a one-way ticket from Cleveland to New York to pursue music and to show the world what he can do. He was not an instant success. Cudi paid his duties in retail, working in American Apparel, Abercrombie & Fitch, and Dean & DeLuca before landing his dream job in A Bathing Ape and catching his big break in the music industry.