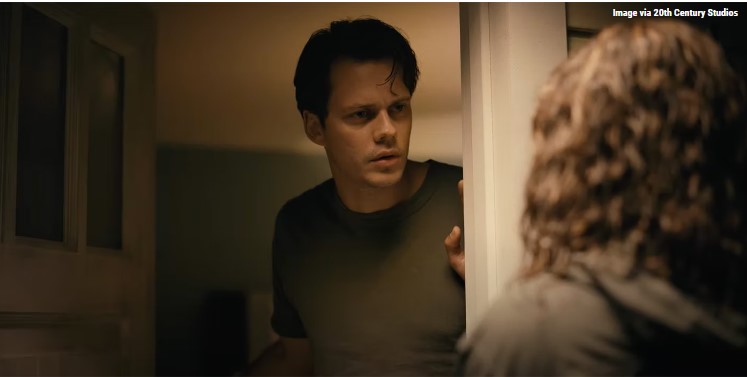 When setting out to review a film, vagueness is often required. This can be a challenge as to be too coy is to not fully encapsulate the cinematic experience and to be overly revealing is to possibly compromise said experience. Of all the releases this year, Barbarian is one that requires the highest degree of subterfuge about its story. This is to ensure that you, dear reader, can go in as cold as possible while still getting an understanding of the quality of the film. By design, it is an experience built around surprise revelations and plunging into the unknown. What is found there is not nearly as impactful as the actual journey itself, making for a mixed bag of horror and humor that rises above its lesser parts enough to hold together.

It is the latest film from writer-director and Whitest Kids U’ Know alum Zach Kregger, who previously directed the abundantly absurd The Civil War on Drugs alongside the late comedy genius Trevor Moore, and begins with what seems to be a mixup. It opens with a shot of a seemingly ordinary house that will, in a way, prove to be the primary setting of the film. The surrounding Detroit neighborhood is shrouded in darkness and rain is pouring down when Tess (Georgina Campbell) pulls up. She has traveled in for a job interview the next day and booked an Airbnb that, when she attempts to get in, doesn’t have the key in the lockbox as it should. Shortly after she discovers this, a light turns on in the house and a man comes to the door. Keith (Bill Skarsgård) seems confused by her presence and the two quickly piece together that the rental has somehow been double booked. Frustrated and aware that they can’t get help this late in the day, they decide that they’ll have to share the space for the night.

Tess is initially wary of the situation and smartly keeps Keith at a distance. However, after they share a bottle of wine, a cautious if friendly flirtation begins to play out. When they go to sleep, she goes to the bedroom and him to the couch. Everything seems normal. Later that night, Tess is awoken by what seems like something running through the house and Keith having night terrors. She awakens him to see what is going on and, getting no answers, goes back to bed. In the morning, Keith is gone but leaves a note saying that he will see her later that day after he goes to scout out a new location for his band to set up. This is when Tess gets her first good look at the neighborhood and discovers it is entirely abandoned except for their house. Every structure is on its last legs and there isn’t a soul in sight. She drives to the interview, which seemingly goes quite well, and then returns to gather her things. It is then that she discovers a secret room in the basement that will turn the entire film on its head.

That is about all that should be shared about the story to preserve the air of uncertainty that is when the film is at its best. There is a palpable sense of peril to the scenes of discovery where Tess tries to get her bearings. Kregger makes use of playful inserts and what are almost gags of doors repeatedly closing behind her. Initially, the camera is more fluid and focused before being thrown into chaos when the truth catches up with her. This is all brought to life with a commanding hand by cinematographer Zach Kuperstein, whose previous outstanding work on 2019’s similarly confined horror The Vigil is realized here as well. The score by composer Anna Drubich is also well-utilized, almost feeling like a riff on Carpenter before plunging deeper into sonic darkness. It is by their craft that we are immersed.

This all makes the descent Tess undertakes a tense one, at least from a technical perspective. Campbell, while not given a lot to work with, embodies a healthy dose of skepticism that unfortunately gets thrown out the window when the story needs her to conveniently make out-of-character choices to keep everything going. While plenty of horror films require a suspension of disbelief and acceptance that characters will make poor choices, Barbarian pushes that to a breaking point. Some of this is acknowledged for humor, like when Tess simply says “nope” at a clearly bad situation in a manner that is reminiscent of Jordan Peele’s film from earlier this year though without the same layered imagery to back it up. Still, the initial buildup remains strong and the closing to that first chapter is appropriately skull-shattering. It would have been better, both for the scene and the rest of the film, if it hadn’t cut away from this opening so that we could sit with the terror for a bit longer. Of course, the speed and splattery nature of this scene still make it a standout. It demonstrates what the film could have been if it had been more committed to capturing moments like this.

When it is made clear what exactly is happening in this house, it deflates much of the tension and marks a pivot that the film struggles to make good on. There are multiple changes in perspective with an extended flashback, in particular, that feels not only unnecessary but betrays a lack of confidence in the story being told. This is disappointing as, once you know what led to this in abundant detail, it becomes less scary and more familiar. Often, the less you know about something, the more nightmarish it is as our minds scramble to make sense of it. The more the film spells everything out, the more it robs us of this experience of true terror and begins to feel narratively creaky. On multiple occasions, it feels like we are retracing steps we have already taken just to hammer home exposition that had already been made abundantly clear. It does come from a few different character perspectives, each deeply despicable in their own ways, but it never feels fresh enough to justify it. It is clear that Kregger sought to run through things an additional time as more of a farce, yet it still remains rather tedious in how drawn out it is. The film begins to wander and roam, leading to a sense that it isn’t really sure what to do with itself. Some revelations remain particularly unsettling while others lack the same force as the moments in the beginning. It is a film of diminishing returns that lacks the inventiveness to keep pushing itself into new heights of horror.

“This time I was kind enough to divulge some free movies to watch online. So, tell your friends by sharing some of these movie posts, you don’t have to go far to go to the cinema, just watch on your cellphone/pc, you can watch this movie by clicking the link I shared.