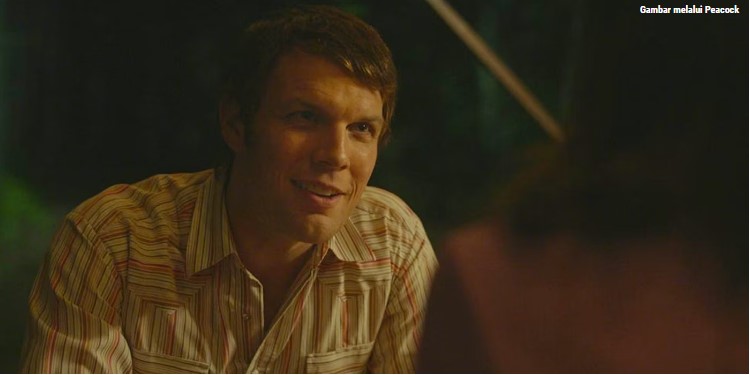 If you’ve ever been to the city in Idaho that is Pocatello, there is much that begins to feel distinctly unnerving about the new true crime series Friend of the Family. This is not because production actually took place there though it does a fine enough job approximating the setting. Instead, it is because of how it turns the banality of the familiar into something unsettlingly unfamiliar. While there has already been a fairly comprehensive documentary about this true story, this fictionalized retelling manages to tread new ground as it takes us into one community to uncover horrifying and heart-wrenching results. For every narrative frustration we have or moments that foster exasperation with the actions of the characters, there is the nauseating knowledge that much of this did indeed happen.

When setting out to write a review of a series like this, there must first be an understanding that there is really not much of this story that can be “spoiled” in any conventional sense. It is about how Jan Broberg was abducted by a family friend and neighbor two times in the 1970s. Sharing this information doesn’t rob the show of its impact. This is not just because of how the story is a matter of historical record but also because of how the series itself is structured. While there are certainly shocking moments, the experience is not one that sets out to be a thriller with twists and turns galore. It is centrally a character study that seeks to begin to, at least partly, understand a situation that initially defies our understanding. It examines the abuse of a child that not only carried on for multiple years but was driven by a distressing lack of urgency from those that could have protected her. It is harrowing in its simplicity as the most basic of actions fail to be taken, and prevailing inaction makes an already bad situation that much worse. It doesn’t let its characters off the hook or absolve them of their actions, instead creating a painful portrait of a group of deeply flawed people.

At the heart of this is Robert “B” Berchtold (Jake Lacy) who will be the one who abducts and abuses Jan. A seemingly charming man, with a punchable face if there ever was one, he waves away any questions about his increasingly obsessive behavior with a “gosh” or a “for Pete’s sake.” This enables him to begin to gradually win over the excruciatingly oblivious Broberg family. The only person who actually seems to be the slightest bit concerned is the patriarch Bob Broberg (Colin Hanks) who has grown wary about the closeness B is building with Jan, but doesn’t fully communicate with his wife Mary Ann (Anna Paquin) until it is too late. The show then takes us through every agonizing moment of how the impressionable Jan, played at a younger age by Hendrix Yancey and at an older age by Mckenna Grace, is manipulated to believe that B is someone that she can trust. It is a grim depiction of grooming that director Eliza Hittman, who is also an executive producer in addition to helming the first and third episodes, captures with an understated yet no less upsetting approach.

All of this makes it a hard show to stomach even as it takes its time in unraveling the full scope of what happened. In the six episodes shared with critics, the full horrors of the situation have still not been made fully apparent, yet it is still never lacking in dread. It jumps around in time, though not excessively so. It uses its episodes effectively to fully develop just how long this had all been taking place with the looming knowledge that it is only going to get worse. One trip to Seattle that sees B take his own family and Jan on soon establishes just how clearly he was doing this out in the open. That is what makes it all the more disconcerting and infuriating. While we often fear the stranger passing by on the street, the reality is that it is someone close to you who is more likely to abuse you. The face of evil can be all too familiar.

Even as there are plenty of escalations to be found in Friend of the Family, the restrained moments where we get taken back to this truth are where it becomes the most terrifying. While it can be jarring to see Paquin and Hanks playing their characters with almost a detachment to much of what is happening, this is precisely by design. However much we wish this wasn’t the case, what this story shows us is that the people we believe are the ones we can trust to protect us are also quite often the ones to let us down. While there is a specificity to the place in what this particular series is tackling, there is a bleak sense that this could happen anywhere. It might not be as chaotic as some of the directions this all went, but it is not difficult to find people overlooking abuse happening right in front of their eyes.

One particularly telling static shot of the passing of time within the Broberg household hammers this home as, even with all that has happened and what is coming, the family tries to carry on as normal. Of course, they can’t, no matter how much they may desperately want to. The phone in the kitchen keeps ringing, a reminder of the outside world that they have tried to shut themselves away from. Much of this ties back to how both the parents are repressed and unable to express themselves in a way that soon proves dire for Jan. As we observe their connection to their faith and how that informs much of their actions, we understand part of why they are so ill-equipped for the situation. There are moments where it almost echoes the recent series Under the Banner of Heaven in beginning to grapple with the darker aspects of ourselves and our beliefs that we don’t like to talk about. It isn’t quite as incisive or sharp as that, often shifting focus away from the more interesting thematic moments, though it has an engaging narrative undercurrent that the show will plunge into.

What further elevates this all is how fully transformed Lacy is as B. While we had seen him play a controlling and stuck-up boyfriend in the series The White Lotus, he is operating on an entirely different level here. Even though he doesn’t particularly look that much like the real-life person, the way he brings a sinister sensibility to each and every scene is what sells it. B’s smile is a mask and his supposed wit is a weapon that he uses to deceive those around him. As his deceptions begin to crumble and the mask starts to slip, Lacy turns even more frightening as his character’s true self begins to emerge. Though this is not the face of a monster we may be warned to look out for, that is what makes him all the more menacing. Lacy doesn’t merely coast off his looks; he reveals how B can shift between states of emotion based on whatever the situation requires of him. One moment he can put on an act of being amicable, and in another, a wave of simmering anger starts to take hold. In delicately exposing how the threats we most need to look out for can come from those who are closest to us, Friend of the Family proves to be a more subtle yet still somber work that stands apart in the crowded genre of true crime.