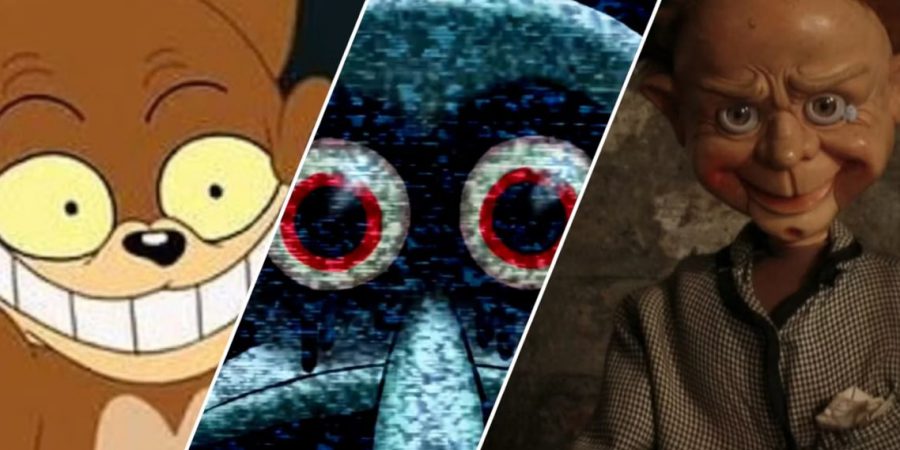 Though, that doesn’t make them any less terrifying. With fans from all aspects of pop culture populating the internet, it is only natural that some of these stories will be about TV shows, whether the shows in question were real or not.

Happy Appy
Happy Appy was the title of a fictional Nick Jr. show that aired only briefly in 1999, but was quickly taken off the air. The show featured a main character that resembled a clay apple held up by a popsicle stick. The entire premise of the show was that Appy would go around visiting kids who were hurt or sick and give them fruits or band-aids to help them feel better. The show was meant to teach kids how to deal with real-life situations that they would often face.

As the show went on however, things gradually became darker. Appy went from a clay apple on a popsicle stick to a freaky demon apple on a rusty iron spike who would stare deeply into the camera in complete silence for uncomfortably long periods of time. The show turned kids getting minor boo-boos into kids being injured in tragic accidents and in often gruesome ways.

Dead Bart
This lost episode of The Simpsons starts out fairly ordinary. It begins with the Simpsons family taking a plane trip overseas, and Bart (Nancy Cartwright) is fooling around as usual. This time, however, there are deadly consequences. Bart breaks the plane window and is sucked out, falling to the ground below.

The episode ends with Bart’s funeral. What’s creepy is that the graveyard is filled with tombstones marking people who have guest starred on the show, some of whom hadn’t even been featured yet, including Michael Jackson. What’s even creepier is that the dates of their deaths are also listed on the headstones, all of which are correct, even if the person in question wasn’t dead at the time. The whole episode was obviously much scarier than anything Treehouse of Horror has ever offered.

Candle Cove
This one is so creepy because there are apparently a handful of people who actually do remember watching it. Candle Cove was ostensibly a TV show broadcast only on local stations. People only started talking about it when someone posted about it on an online forum, and was met with other people who shared similar memories. Or at least, that’s how the story goes.

The show was about pirates, but the characters were much too dark to be shown on children’s television. On top of that, there is an extension of the story that may not necessarily be true, but that sure is creepy. Some versions of the story involve kids having recurring nightmares or becoming ill as a result of the show. What’s more, the parents of said children who may or may not exist attest that the kids weren’t watching anything at all, just a screen full of static.

‘Ed, Edd n Eddy’ Lost Episode
The classic Nickelodeon show Ed, Edd n Eddy was extremely popular in the 90s and 00s, and fills many with nostalgia even to this day. However, there is a story that there was a lost episode which many people apparently remember watching, and took to online forums immediately after the episode aired to discuss it.

The episode consisted of a series of still frames in terrible quality. The first featured Eddy (Tony Sampson) with a murderous look on his face, complete with red eyes, who leads Ed (Matt Hill) down the street. Ed is crying. Other shots show Edd (Sam Vincent) lying in his bed, crying, and one of the characters being swallowed by a baby who suddenly emerges from underneath the couch.

Squidward’s Death
A show as popular among both kids and adults as Spongebob Squarepants is bound to be rife with many horror stories written by fans. However, there is one that sticks out the most among the others. The story concerns a Nickeloden intern who is selected to view a Spongebob episode before it airs. What he sees disturbs him.

Squidward (Rodger Bumpass) has actually landed himself a gig and is performing in Bikini Bottom that night. The first thing that sticks out to the intern is that every character has photorealistic eyes, which make for a pretty creepy image. Squidward performs, and is booed by the entire town. He cries and goes home as demonic whispers and faint laughter play in the background. Disturbing video archival footage from goodness-knows-where is briefly shown, and by the end of the episode, Squidward is dead in a very graphic manner.

‘Tom and Jerry’ Lost Episode
Tom and Jerry is one of the oldest and most successful cartoon series of all time, so it’s no wonder that it has so many fans. Especially some who are willing to write scary stories about the show. Like many TV creepypastas, the story concerns a lost episode in which Tom’s owner begins deliberately hurting the poor cat when he is caught trying to enter her basement.

Jerry begins to take pity on Tom for once, and kills his owner. They then carry her body down to the basement, which is when it is revealed that there are other bodies in the basement. Jerry then kills Tom, and puts the house up for sale, grinning and laughing the entire time.

The Gurgles and Bugman Show
This creepypasta concerns another fictional show, this time featuring a freaky-deaky clown named Gurgles and his companion, Bugman, a hunchbacked man with the head of a fly. Most of the show involved them playing harmless pranks on people as they went about their nightly routines, but it always ended with Bugman sucking the blood of an unsuspecting victim while they slept. Heavy laughtrack was always played over this gruesome scene.

The writer states he saw the show when he was a boy, and that his classmate had died one day, and he believed he couldn’t have because he saw him on The Gurgles and Bugman Show the night before. It was then that he realized what was actually happening on the show, and he never watched it again.

Channel Infinity
The Channel Infinity creepypasta is part of a subgenre known as ritual creepypastas. Basically, they’re a series of stories involving rituals, similar to the Bloody Mary story that many hear as children. This ritual isn’t about any particular show, but does involve the use of a hidden TV channel that leads to an alternate dimension.

After performing the long and elaborate ritual, it is said that Channel Infinity will then become available to the viewer, which contains shows all about some pretty life-changing topics that will make any who view them succeed immensely. However, there are risks. For one, part of the ritual involves watching an altered version of your favourite show where every character you love dies in a horrific manner. Another risk is that when you are pulled into the alternate dimension, you have a chance of being killed by the beings that inhabit it.

The ‘Rugrats’ Theory
Okay, so this one is technically a theory, but it’s on an official Creepypasta website, so it still counts. The short version is that none of the characters from the original series of Rugrats real, and that all of them were made up by Angelica (Cheryl Chase). The other kids apparently all died in horrific tragedies, which explains the behaviour of some characters.

For example, the theory states that Chuckie (Nancy Cartwright) died along with his mother, which is why Chuckie’s father is such a nervous wreck.

12 Minutes
This fictional story focusses on an Atlanta-based news channel having an empty time slot, and filling it with a religious talk show with a local Reverend. Every twelve minutes exactly, the Reverend would receive a call from a woman complaining of illness as a result of watching his show. This carried on for months until viewership dropped and the channel pulled the show to focus on the mysterious epidemic plaguing the city, which many claim was caused by the show.

An intern decided to view the tapes searching for potential causes. When he paused the tapes every twelve minutes, he found that inserted into the tape was a single frame of a disembodied head. When he edited all the frames together, he noticed that the head appeared to be talking. A few weeks later, he was found in his home after having murdered his wife, mumbling unintelligibly under his breath.