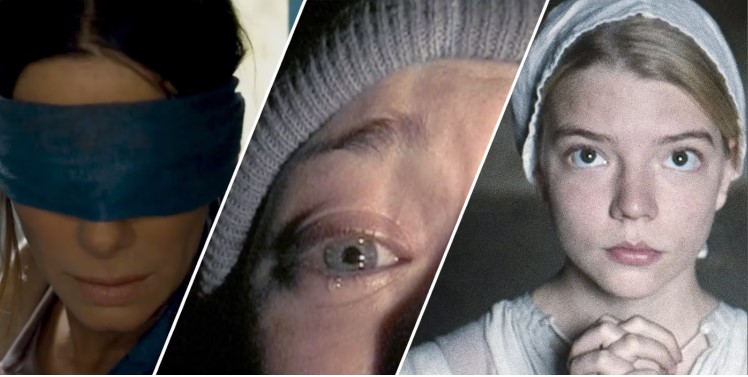 Good horror movies are designed to make us jump, squirm in our seats, and recoil in terror. But great horror movies go deeper, burrowing into our subconscious to seek the things that truly terrify us. And sometimes, that doesn’t include copious amounts of blood and gore.

Enduring horror movie villains like Michael Myers, Freddy Krueger, and Jason Voorhees have their place, but some of the scariest villains in the genre are never seen. When the protagonists are facing off against an invisible, intangible, or seemingly indestructible threat, the terror gets ratcheted up to 11. After all, what you don’t see can be the scariest thing of all.

The Overlook Hotel — ‘The Shining’ (1980)
While Jack Torrance (Jack Nicholson) may be the conduit, the real evil in Stanley Kubrick’s horror masterpiece, The Shining, is where the action occurs: the Overlook Hotel. While physical ghosts may haunt Jack and his family, something more ethereal is drawing them there.

The Overlook Hotel has been the site of multiple suicides, gangland killings, and brutal murders since its construction in 1909. As the movie’s sadistic antagonist, it is hellbent on psychologically tormenting Jack into killing his family and stealing Danny’s (Danny Lloyd) “Shining” ability. In addition, its physical layout makes no sense. Windows in odd places, doors that couldn’t lead anywhere, and props that move between rooms add to the audience’s sense of confusion and paranoia.

The Entities — ‘Bird Box’ (2018)
The malevolent entities in Netflix’s post-apocalyptic horror thriller Bird Box are never seen by the viewer, who are only privy to the shadowy wind that follows in their wake. What is known is that looking at these creatures—or creature, it is never specified whether there is more than one—causes the people that look at them to experience personalized delusions and eventually commit suicide (hence the use of blindfolds).

What makes the entities eerier is that their origin or intent is never explained. Are they aliens intent on wiping out humanity? Are they friendly aliens trying to communicate with us but whose mental powers are too strong for human minds? Are they demons? The fact that there is no right answer is the beauty—and terror—inherent in Bird Box’s invisible enemies.

Nothing — ‘The Night House’ (2021)
David Bruckner’s The Night House is a psychological thrill ride that deals with the themes of mourning and loss, secrets, and the dark impulses we harbor. After her husband kills himself, grief-stricken Beth (Rebecca Hall) stumbles across a house identical to hers in the nearby woods. With this discovery, Beth is left wondering whether her dead husband was a serial killer who lured women to their deaths or if he was possessed. It turns out both are correct.

Beth encountered the evil called Nothing when she was a teenager. It is despair personified, a formidable enemy that lures people into doing wicked things. Seldom relying on the horror genre’s staple—the jump scare—the real terror in The Night House comes from a steadily building sense of unease. The atmosphere continues after the movie’s ambiguous ending because the viewer is unsure whether Beth has escaped Nothing or it’s still exerting its deadly influence.

The Thing — ‘The Thing’ (1982)
John Carpenter never reveals the true form of the extraterrestrial monster in his cult classic horror movie, The Thing. Instead, audiences are treated to bizarre and grisly practical special effects that show the consequences of being “infected” by the titular Thing, but not the creature itself.

The movie is set in a remote Antarctic research base, which is unsettling in and of itself. But the fact that the Thing can mimic any life form—human or animal—makes the movie even more terrifying and turns it into a study of paranoia and human behavior. A great example of this—and one of the movie’s most nail-biting scenes—is when MacReady (Kurt Russell) tests the blood of the surviving research team to determine who is infected. Despite being 40 years old, The Thing still manages to shock.

Death — The ‘Final Destination’ Franchise (2000-present)
Death can be fickle, and that’s certainly the case in the Final Destination franchise. The premise is that, in each movie, a character has a premonition of impending disaster that usually involves the brutal deaths of numerous people. Thanks to their premonitions, the characters can cheat death.

But Death doesn’t like to be cheated. So, survivors begin to die one by one in a series of bizarre accidents: an unattended bathtub here, a loose screw there. Portraying Death as an omnipresent, unseen entity and not the archetypal black-robed, scythe-wielding Grim Reaper is what makes Final Destination audiences fidget with fear.

The Blair Witch — ‘The Blair Witch Project’ (1999)
The found-footage film that changed the horror genre forever, The Blair Witch Project, cast three unknown actors, adding to the”‘authenticity” of the supposed documentary. At the time of its release, when the internet was not the behemoth it is today, many thought the low-budget film was an actual account of the documentarians’ run-ins with the fictional Maryland witch.

From its panic-inducing handheld camera work and tight editing to distorted screams and that unforgettable final scene, The Blair Witch Project manages to terrify at every turn without ever revealing the Blair Witch. Even though we know she’s not real, some of us are left asking, “Could she be…?”

In Paranormal Activity 3, released in 2011, the demonic entity appears in physical form and is revealed to be Asmodeus “Tobi” of the Book of Tobit, a demon that features in early Biblical writings. But it’s the first movie that is the ultimate fright-fest, as the scares escalate and viewers watch eagerly, hoping to glimpse the creature terrorizing the unassuming inhabitants of a San Diego home.

“He Who Walks Behind the Rows” — ‘Children of the Corn’ (1984)
Based on a short story by Stephen King, the supernatural slasher film Children of the Corn centers around a demonic fertility spirit that lives among the corn stalks in the fictional agricultural town of Gatlin, Nebraska. Known as “He Who Walks Behind the Rows,” the spirit encourages the local children to form a cult and ritually murder the town’s adults.

One of the best adaptations of a Stephen King work, Children of the Corn, does not suffer from having a big bad that remains unseen. The town’s unnerving children more than compensate for the lack of a visible villain.

The film’s title is a decoy: the witch is not the main threat; it is Black Phillip. The use of a goat—a seemingly innocuous animal—as the incarnation of Satan infuses the movie with a sense of paranoia and dread. His presence makes the viewer question whether the events that unfold are supernatural or psychological. Black Phillip’s reveal at the end of the movie adds a layer of distrust and fear that, with the benefit of hindsight, becomes obvious.

King Paimon — ‘Hereditary’ (2018)
Rifling through her mother’s belongings, Annie (Toni Collette) discovers a book about a demon king named Paimon seeking a male body to inhabit. According to legend, those who summon King Paimon will receive untold wealth and knowledge.

By having Paimon possess Annie’s son Peter (Alex Wolff) and the demon viewing things through his eyes, Hereditary succeeds in creating a world of psychological, physical, and spiritual torment without ever revealing the demon king’s true form. Hail Paimon!