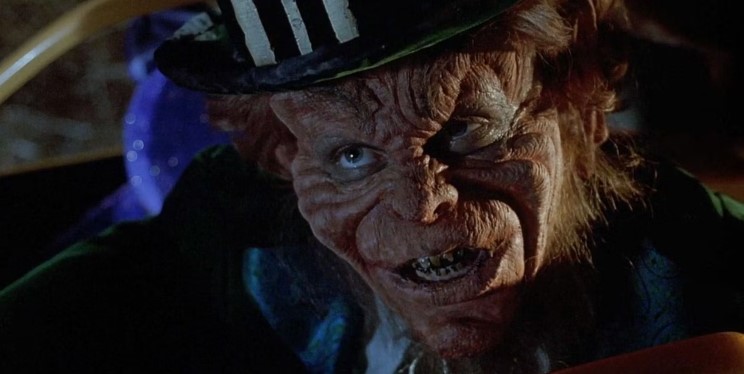 Some may say that the 1990s were a bad time for horror movies, however, horror fans just may disagree. Many movie buffs regard the ’90s as a decade of hilarious, campy, and gory flicks that are perfect to watch this Halloween.

Horror movies from this decade were made up of several teen slashers and sequels of popular ’80s horror films. From the iconic teen slasher Scream to the long-awaited Halloween sequel, many ’90s horror flicks are still beloved by fans of the macabre.

‘Idle Hands’ (1999)
A slacker teen named Anton (Devon Sawa) finds his right hand has become possessed by a demonic force. He tries to control the hand, but it has a mind of its own and a thirst for murder. When the hand kills his two friends, Pnub (Elden Henson) and Mick (Seth Green), they return as wisecracking zombies. The hand also tries to ruin his chances with his beautiful neighbor Molly (Jessica Alba).

Idle Hands is a mix of gore and slapstick comedy that didn’t immensely please critics but is well-loved by fans of 90s horror. It received only 15% on Rotten Tomatoes, but the audience score is nearly 60%, with fans defending it as being both fun and gruesome.

‘Leprechaun‘ (1993)
While on vacation in Ireland, Dan (Shay Duffin) steals 100 gold coins from a leprechaun played by Warwick Davis. He is followed home by the creature but locks him away in a crate using a four-leaf clover. 10 years later, J.D Redding (John Sanderford) and his daughter (Jennifer Anniston) accidentally release the leprechaun, who goes on a murderous rampage to get his gold back.

Many critics say that Leprechaunis ridiculous and far too B-grade to be taken seriously as a horror movie. Some fans, however, say that you have to suspend any sense of disbelief and take the movie for what it is, a ridiculous, campy, slapstick horror film with decent special effects and an entertaining plot.

‘I Know What You Did Last Summer‘ (1997)
A year after running over a fisherman and dumping his body in the water, the four friends who committed the crime come together after receiving a terrifying letter revealing that someone saw what they had done. The group encounters a murderer with a hook for a hand who continues to stalk and torment the teens.

I Know What You Did Last Summer was met with low critic scores, but it stars some of the most memorable teen heartthrobs from the ’90s, such as Sarah Michelle Gellar as Helen, Freddie Prinze Jr. as Ray, and Jennifer Love Hewitt as Julie. The star-studded cast made it a hit among teenage viewers, and it remains an iconic teen slasher film that is highly entertaining and delivers plenty of scares.

‘Bride of Chucky‘ (1998)
After being disassembled by the police, Chucky (Brad Dourif), a killer doll, is resurrected by his ex-girlfriend Tiffany (Jennifer Tilly). After being brought back to life, Chucky traps Tiffany in a doll as well, leading them to hunt down Chucky’s human form that holds an amulet to turn them back into humans.

Many critics call Bride of Chucky corny and redundant, relying on jump scares to fit the horror genre, but other critics and fans couldn’t disagree more. People praise Tilly for her role as Tiffany; she and Chucky make the perfect comedic-horror duo. The film is well-paced and entertaining from start to finish, making it a notable entry in the Chucky franchise.

‘Lake Placid‘ (1999)
A mysterious and terrifying creature violently kills a man at a lake, and the local warden (Bill Pullman) begins to look into the strange case with the town Sheriff (Brendan Gleeson) and visiting paleontologist (Bridget Fonda). They use clues to eventually discover a gigantic 30 ft vicious reptile looking to devour anything that gets in its way. They discover a local woman, played by Betty White, has been taking care of the monster for years and helping to lure in victims.

Lake Placid was poorly received by critics, calling it unimaginative and nothing but a Jaws ripoff. However, many viewers loved the film, a favorite among B-movie horror fans. People say that Betty White’s role as the sinister Delores Bickerman is worth the watch alone.

‘Scream’ (1996)
There’s a masked murderer in the quiet town of Woodsboro, and suddenly, no one is safe. The killer is obsessed with scary movies, taunting his victims with horror trivia before he gruesomely murders them. A group of teens and a local reporter (Courtney Cox) try to solve the mystery, but it’s not long before Sydney (Neve Campbell) finds herself the killer’s main target.

Scream was met with mixed reviews from critics, many saying the movie is too packed with references and twists to be fully appreciated. Other critics and fans agree that the movie is the perfect blend of horror, comedy, and suspense. Sydney is one of the most iconic final girls, starring in a series of sequels and inspiring other horror girls to come.

‘Vampire in Brooklyn’ (1995)
A detective named Rita (Angela Bassett), mourning her mother’s death, finds herself assigned to a baffling case surrounding a serial murderer. After examining the crime scene, Rita meets the smooth-talking Maximilian (Eddie Murphy), who is determined to woo her. Rita, however, has been suffering from crippling hallucinations and calls upon Dr. Zeko (Zakes Mokae), an occultist who suspects a vampire is on the loose.

Vampire in Brooklyn has a 12% critics score on Rotten Tomatoes but a 31% audience score, with plenty of fans defending the film. Critics say that the movie confuses horror and comedy and doesn’t do a good job of blending the genres, but fans disagree. Many fans say it’s a perfect horror-comedy blend and the campy themes still hold up.

‘Halloween H20: 20 Years Later’ (1998)
Two decades after surviving the original massacre on Halloween night in 1978, Laurie Strode (Jamie Lee Curtis) is working as the headmistress of a private school in a new town. As Halloween approaches, she finds herself again under attack by Micheal Myers, but this time, she’s ready to settle the score.

Many critics weren’t too impressed with the second installment in the Halloweenfranchise. The Casper-like mask worn by Myers is frequently made fun of, but fans and recent critics think the movie itself has been overlooked. Curtis played a brilliant, haunted Laurie 20 years after the original, and the movie is genuinely terrifying.

‘The Haunting’ (1999)
Dr. David Marrow (Liam Neeson) calls upon a group of visitors to come to a secluded mansion for a study on insomnia. However, Marrow is actually studying the effects of fear and plans to scare the subjects. His plans are taken over by an evil spirit living in the house determined to torment its guests.

The Haunting may not have been revered by critics, but it features a star-studded cast led by Neeson, Catherine Zeta-Jones, and Owen Wilson. Many reviews call out the film for relying on special effects and claim it is neither scary nor particularly entertaining. Fans of the film, however, defend The Haunting, calling it atmospheric and intense.

‘Freddy’s Dead: The Final Nightmare’ (1991)
The murderous monster Freddy Krueger (Robert Englund) moves to a new town on the hunt for new victims. He finds his long-lost daughter Maggie (Lisa Zane) and tries to recruit her to his murderous pursuits. She has other plans, however, and ends up in a bloody showdown between Father and Daughter.

Freddy’s Dead is the final installment in the Nightmare franchise, and it was met with slightly better reviews than some previous sequels but still failed to impress critics. Fans of the franchise generally believe that while nothing beats the original, the movie is a worthy finale, filled with plenty of frightful scenes, funny moments, and cameos.